The charade is exposed when Katherine (Christine Baranski) arrives -she missed a note put on the door by Val (Dan Futterman), which was removed by the two tabloid journalists from The Enquirer before she arrived-, knocks on the door and announces herself as “Mrs. Goldman”; then, at the same time, the rest of the gang returns to the lobby, and Albert (Nathan Lane) is shocked to see Katherine in the house.

Val, Armand (Robin Williams) and Barbara (Calista Flockhart) cough up the details of the façade they had set up to impress Barbara’s moralist parents, by making them believe Albert was a housewife, Armand was a Greek cultural attaché, and they were a “normal, traditional couple”.  Barbara’s mom, Louise (Dianne Wiest) burst into tears, and as they are about to leave, Harry and his photographer (Tom McGowan and Grant Heslov) ALMOST take a picture of the Senator (Gene Hackman); this means he is in trouble, and all hell would break loose if a picture of him at the house of a gay couple were published.

But then, everyone unites to help Barbara’s family flee the gathering flock of reporters without being discovered, and everyone dress up in drag and departs by parading outside the nightclub assisted by Armand’s guys/girls, at the rhythm of “We Are Family”.  The Keelys take off in Katherine’s car, safely.

The movie ends with Val and Barbara getting married in front of a large crew, and even some of the ladies -including Albert- crying. 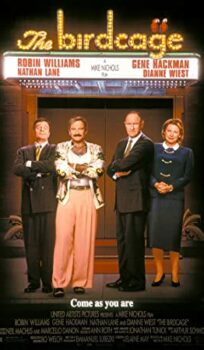