SHORT VERSION:
Taran, Eilonwy, Fflewddur, and Gurgi manage to locate the Black Cauldron in the possession of the witches Orddu, Orgoch, and Orwen in the marshes of Morva. Taran trades them his magic sword for the cauldron, and before the witches disappear, they – knowing of his desire to destroy it – inform him that the cauldron is indestructible; only its magic powers can be stopped, and the only way to do that is for someone to climb into it of their own free will, but at the cost of their life. Later, while the quartet are sitting around moping and wondering what to do with this cauldron that they can’t use, the Horned King’s forces appear, and while Gurgi is able to hide, the others and the cauldron are taken to the Horned King’s castle.

The Horned King uses the cauldron’s power to reanimate his dead army, but as he goes outside to watch them march forth into the world, Gurgi sneaks into the castle and finds and unties his friends. Taran decides to jump into the cauldron to put a stop to its magic, but Gurgi halts him and sacrifices his own life instead, believing Taran has more to lose than he does. The army falls lifeless again and the power starts to return to the cauldron. The enraged Horned King confronts Taran, and believing him to be responsible, he tries to send Taran into the cauldron for foiling his plans. Instead, the Horned King winds up going into it and dies. Taran and company then escape the castle before the cauldron’s magic destroys it.

The witches appear before Taran and his friends intending to take the cauldron back, but Taran offers to trade it in exchange for them bringing Gurgi back to life. The witches give them his body and disappear with the cauldron, and Gurgi soon awakens. After he makes Taran and Eilonwy kiss, the triumphant group start their journey back to Caer Dallben.

LONG VERSION:
After Taran, Eilonwy, and Fflewddur are having a breather following an escape from the Horned King’s castle, Gurgi – a furry mischievous creature that Taran had encountered just before Hen Wen was first captured by the Horned King’s gwythaints – jumps Fflewddur, intending to take his hat and magic harp. Taran stops Gurgi and tells him to go away, but as he goes, he notices Hen Wen’s tracks on the ground and remembers that he saw the pig running through here earlier on (Hen Wen had escaped the castle long before they did). After telling the trio about this, they all follow the tracks until they end up going down a magical whirlpool right into the underground kingdom of the Fairfolk, where Hen Wen is found alive and in their care.

The Fairfolk’s king Eidilleg asks if the Horned King is still burning and killing above ground, and then wonders aloud when someone will stand up to him. Taran informs him that the Horned King is after the Black Cauldron and will kill everyone if he finds and uses it, but Eidilleg informs him that he will never find it because it is safely hidden in the marshes of Morva. Taran tells Eilonwy, Fflewddur, and Gurgi that they all must get the cauldron and destroy it if they are to stop the Horned King, and Eidilleg selects his right-hand man Doli to lead the four protagonists to Morva. Eidilleg then has the other fairies magically lift the quartet back up to the surface while also promising Taran that his people will return Hen Wen back to his master Dallben.

Doli brings the gang to a house in the marshes inhabited by the witch sisters Orddu, Orgoch, and Orwen, and Taran explains to them that they have come for the Black Cauldron. The sisters don’t want to give it up, and when Orddu tries to offer him different cooking pots instead, Taran’s magic sword slices them all apart under its own power. Desiring to have the sword, Orddu offers to trade it for the cauldron (knowing that the quartet really can’t do anything with it and will somehow get it back from them later, giving them both the sword and the cauldron), and Taran hesitantly accepts, knowing that he is giving up a chance at becoming the greatest of warriors with this magical weapon. The witches take the sword and disappear, and then their whole house is torn apart and the cauldron rises up out of the ground. The witches then reappear, and knowing of Taran’s desire to destroy the cauldron, they explain to Taran that it is indestructible; only its evil powers can be stopped. However, to do that, a living being must climb into the cauldron of their own free will, but at the cost of their life. They laugh at them for getting something that they can’t do anything with and then vanish, saying that they always keep a bargain.

That night, as everyone sits around moping and wondering what to do next, Doli lashes out at everyone and particularly blames Taran for the situation they’re now in, then disappears back to the Fairfolk kingdom. Taran tells the others that he agrees with what Doli said about him and says that he is nothing without his sword, but Eilonwy tries to lift his spirits by telling him that he is a somebody and must believe in himself, for she does. After Taran replies that he is grateful to all of them for their loyalty and friendship, the Horned King’s forces appear, having tracked the group down thanks to his gwythaints. While Gurgi hides, the soldiers take Taran, Eilonwy, Fflewddur, and the cauldron to the Horned King’s castle.

The tied-up trio later watch as the Horned King calls upon the cauldron’s power to reanimate his dead soldiers, and once they are revived, he sends them out into the world with orders to destroy everything in their path, and then goes up onto a balcony with his right-hand goon Creeper to watch them as they march. Meanwhile, Gurgi enters the castle through an underground passageway connected to the moat, having come to save his friends. He finds them after the Horned King has left the room and unties them, and Taran orders Eilonwy and Fflewddur to leave with Gurgi, having decided to sacrifice himself to the cauldron in order to reverse its magic. However, Gurgi refuses to let him do it and instead jumps into the cauldron himself, believing Taran has more to lose than he does. The magic comes undone and renders the undead soldiers lifeless again, and Taran orders the others to escape while he attempts to save Gurgi.

As the cauldron’s power returns to it, very strong winds kick up that threaten to blow Taran into the cauldron. The angered Horned King then appears, and believing that Taran was responsible for the ruination of his plans, he tries to send him into the cauldron himself as punishment. However, Taran resists his attack, and the Horned King ends up being the one meeting his demise in the cauldron. The cauldron’s magic then goes far beyond anyone’s control and starts to bring the castle down, but Taran reunites with Eilonwy and Fflewddur and together they manage to get out of the castle via the route Gurgi took before it is reduced to rubble. As they row to the other side of the moat, they see Creeper flying away on a gwythaint and cackling with delight over how his oppressive master has been done away with.

As the trio get to shore, the now-inert cauldron bobs up out of the water, and then the three witches show up again. They tell the trio that they’ll be taking the cauldron now, since it is of no use to them anymore, but Fflewddur tells them to stay their hands, saying that they wish to make a trade for it. Orwen offers Taran his magic sword back in exchange for the cauldron, but Taran refuses it, saying that he is a pig keeper and thus has no use for a sword, and instead requests for them to bring Gurgi back to life. They reluctantly tell him that such a thing is impossible for them to pull off, prompting Fflewddur to challenge their powers. The witches then disappear with the cauldron, saying that they have made a bargain, and after they vanish, Gurgi’s body appears.

The trio begin to grieve for Gurgi, thinking that he is still dead, but then he suddenly awakens. Amidst the joy over his revival, Gurgi makes Taran kiss Eilonwy, and then the four of them begin the journey back to Caer Dallben. As they go, Dallben and Doli are shown watching them through one of Hen Wen’s oracular visions, and Dallben proudly remarks about Taran: “You did well, my boy.” 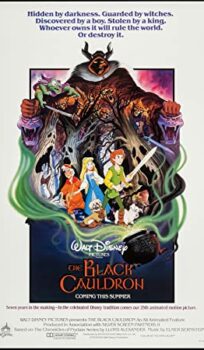