Alec (Kelly Reno) and the Black (the black stallion) are rescued from the desert island after they survive the sinking of the steamer ship they were traveling.

Over the weeks the two were on the island, they developed a close bond, and the Black comes to trust only Alec.  Alec keeps the Black in his back yard when he returns home but when the horse gets spooked and runs away, a retired jockey named Henry (Mickey Rooney), who owns a farm nearby, houses him safely.

Alec and Henry develop a friendship and eventually Alec convinces Henry to train the Black as a racehorse. Word gets around that there is a new, incredibly fast but mysterious horse on the racing circuit and the Black is entered into a race between the country’s top two thoroughbreds.  The public also doesn’t realize that Alec isn’t just the jockey but also a young boy.  Moments before the race starts, one of the other horses causes an injury to the Black’s leg and Alec is nearly thrown at the starting gate. But he and the Black regain their composure and speed, and work together like they did on the island.

The Black wins the race. 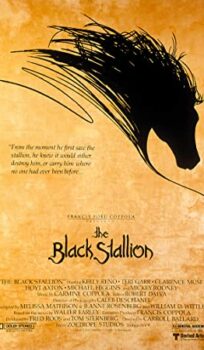