Pooper: (Thanks Smudgy)
The Blob is frozen using large quantities of Liquid Nitrogen. The Blob crystalizes into thousands of pinkish shards. As the Army is carting away the frozen bits into refrigerated shipping units, Reverend Meeker (Del Close) takes a few of the crystals and puts them into a mason jar. The government dumps the crystalized blob at the North Pole where it will stay forever frozen, but in the last scene we see Meeker gazing evilly into the mason jar, where a now thawed baby blob is crawling around. We are led to presume that when the time is right for the preacher’s apocalypse, he will release the blob.

Long Ending:
The film opens in a small town and follows the lives of the residents there. Football hero Paul Taylor (Donovan Leitch, Jr.) goes on a date with cheerleader Meg Penny (Shawnee Smith). Meg’s younger brother Kevin sneaks off to a horror film with his best buddy Eddie. And the police hassle juvenile delinquent, Brian Flagg (Kevin Dillon). All seems normal until an object hurtles out of space and crash lands in the woods. A homeless man goes to investigate. At the site of the cras, he is attacked by a gelatinous creature (the BLOB) that emerges from within the object. The blob begins corroding the homeless man’s hand.

Paul, Meg and Brian happen upon the homeless man and take him to the hospital. Not wanting to be blamed for the incident, Brian runs off after they check him in. When Paul goes to check on the homeless man, the man is dead and the majority of his body disintegrated. Paul calls for help, but the blob (hiding on the ceiling) falls on top of Paul and kills him in front of Meg. It becomes obvious that the Blob digests any living thing it comes into contact with… and gets bigger as it eats. The Blob slithers away after ingesting Paul. None of the police believe Meg’s story about the Blob. Meanwhile, the creature attacks and kills other innocent townsfolk.

Meg finds Brian inside a diner and asks him to corroborate her story. He declines, but then the pair are attacked by the Blob. Although it kills the employees and sheriff, Meg and Brian avoid being devoured when they hide inside the restaurant freezer. When the Blob tries to chase them therein, the part of it that enters the freezer freezes and crumbles. The Blob escapes into the sewers as Meg and Brian run away. The local Reverend Meeker (Del Close) witnesses the Blob’s escape and collects the frozen pieces of the Blob that he finds in the freezer.

Meg and Brian return to the woods to try and find help (the local police are combing the woods for Paul’s killer). They run into a bunch of federal government agents that are at the crash site from which the Blob emerged (including a small role for Bill Moseley). The agents are led by a scientist named Dr. Meddows (Joe Seneca). They claim to be aware of the Blob and that they are there to quarantine and rescue the town. They begin driving Meg and Brian back to the town. Brian, who doesn’t trust the authorities, breaks out of the van and ditches Meg. When she arrives back to town, she finds the residents being evacuated to the town hall. Meg realizes her brother is at the movie theaters and goes off to get him and Eddie.

Meanwhile, Brian sneaks back to the crash site to retrieve his motorcycle that was left there. He eavesdrops on the agents and learns that the object that crashed down from the sky was actually a US satellite. It turns out Meddows sent placed germs in the satellite and sent it into space as part of an experiment to mutate the germs. The Blob is the result. Meddows wants to capture the Blob so it can be used as a military weapon against Communist countries. Over the objections of his subordinates, Meddows declares that everyone in the town is expendable. Brian is discovered and the agents try to kill him. He manages to escape on his motorcycle. Although he considers fleeing, Brian heads back into town to rescue everyone.

The Blob attacks the movie theater. Though Meg helps Kevin and Eddie escape the Blob’s initial attack by fleeing into the sewers, the Blob follows them in there and kills Eddie. Although Kevin is able to escape out of a sewer grate, Meg is cornered in the sewers. Brian arrives on his motorcycle just in time to escape.Dr. Meddows tries to prevent Meg and Kevin from escaping (not wanting them to jeopardize his capture mission and expose the government’s role in the fiasco). But Kevin uses a bazooka from a dead agent to blast a hole to freedom. The Blob then catches and eats Dr. Meddows. With their supervisor dead, the other agents abandon their capture efforts and try to blow up the Blob. Their attempt fails and the now building-sized Blob attacks the townsfolk gathered in the Town Hall. Reverend Meeker is severely burned when trying to fight the Blob.

Brian runs off and gets a snow-making truck from a nearby mechanic shop. He crashes it into the Blob, but it doesn’t blow up as he hoped. Meg sees Brian in trouble. She distracts the Blob from eating Brian and sets C-4 explosives in the truck’s liquid nitrogen tanks. The tanks blow up and flash freeze the Blob, turning it into mini crystals. The townsfolk begin collecting the frozen crystals to be placed into freezers to ensure they won’t melt. Brian and Meg embrace.

The film jumps ahead in time to find Reverend Meeker giving a fire and brimstone sermon at a tent revival. After the service, a parishioner approaches him backstage and asks him when the apocalypse will arrive. Meeker responds that god will give him a sign and that he will initiate the apocalypse. As he says this, Meeker holds up a container with the thawed pieces of Blob that he collected from the diner freezer. 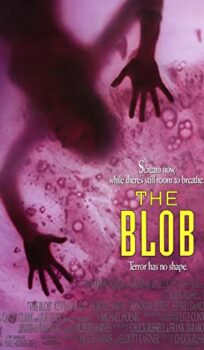