SHORT VERSION:
Peter manages to obtain a recording caught on a bug installed in Caroline’s apartment intercom where Maria confesses to having struck Henry with Sherman’s car, and he mails it anonymously to Sherman’s attorney Killian. Killian plays the tape for Sherman, but informs him that this is not admissible as evidence because it was illegally procured, and the only way he could use it would be if he lied in court and said it was his.

Sherman therefore tries to get a legal confession from Maria by wearing a wire and going to her husband’s funeral, then getting her alone and tricking her into confessing, but she discovers the wire before she can say anything incriminating and he runs off. Assistant D.A. Kramer – the prosecutor at Sherman’s trial who was also at the funeral to talk to Maria and had overheard what just happened between her and Sherman – then approaches Maria and (under orders from D.A. Weiss) works out a deal with her where she will be granted immunity in exchange for being coached on what to say in order to get Sherman declared guilty.

Seeing no other alternatives, Sherman decides to use the intercom recording in his next court session. He plays it on a tape recorder with a speaker for all to hear and then lies to the judge by saying that he owns this recording (which Killian goes along with), resulting in his acquittal. Sherman subsequently disappears, having opted for a very reclusive life somewhere else, and Peter publishes a novel about Sherman and his ordeal that becomes a huge success.

LONG VERSION:
One night, a drunk Peter (Bruce Willis) gets approached by an equally drunk Caroline (Beth Broderick) while in a restaurant she owns and operates and gets taken into her office, and she tells him that she found out that Filippo (Emmanuel Xuereb), an Italian artist she has been seeing, has been cheating on her with Sherman’s (Tom Hanks) own mistress Maria (Melanie Griffith), to whom she has been illegally subletting her rent-controlled apartment. She also says that Maria was in the car with Sherman the night Henry Lamb (Patrick Malone) was run over. When Peter asks her how she knows about this, she answers that her apartment’s intercom turned out to be bugged, in an attempt by her landlord to prove that she wasn’t living there so she could be justifiably evicted, and it recorded Maria making that confession. She tells Peter that she doesn’t know where Sherman or Maria are and is trusting him to find them. Peter meets with Maria’s husband Arthur (Alan King) to find out how to get a hold of Maria, but Arthur winds up getting very intoxicated and suddenly dies before he can tell him.

Peter then meets with Maria when she comes into town for the funeral, and he quickly confronts her with the knowledge of how she was Sherman’s lover and was with him the night of the hit-and-run and wants to get her side of the story, but she just tells him to go screw himself. He gets a story out in the newspaper about how Arthur’s wife was the mystery woman riding with Sherman, but when he meets his lawyer acquaintance Albert (Clifton James) and Reverend Bacon (John Hancock) in Henry’s hospital room just after the kid has died from his injuries, Albert chews him out for covering this and not Henry’s story. Peter tells Albert that he believes Sherman wasn’t behind the wheel that night and he thinks he can prove it, but the disinterested Albert informs him that the real story that needs to be printed is the hospital being negligent in their treatment of Henry by healing his broken wrist and not fixing his cerebral concussion, and how Albert, on behalf of Henry’s mother, is suing the hospital for $10 million in damages. Peter gets that story out to the media, and after Bronx D.A. Weiss (F. Murray Abraham) sees it, he feels that his chances of being re-elected have become jeopardized now that the people of the Bronx has taken their eyes off of Sherman. On a suggestion from his staff member Andruitti (Louis Giambalvo), he decides to focus his attention on Maria so the people will turn their sights back onto Sherman. He thus tells Andruitti to go to the press and say that they are going to question her, then tells his Assistant D.A. Kramer (Saul Rubinek) – who is the prosecutor in Sherman’s case – to go to Maria while she is attending Arthur’s funeral later today and tell her that she is in a lot of trouble, but if she cooperates and says what they want her to say, she will be granted immunity.

Peter goes to Caroline’s apartment building and asks the handyman who installed the bug in the intercom to provide him with the tape, and he gets it and mails it off to Sherman’s attorney Killian (Kevin Dunn). Killian calls for Sherman to come to his office and plays the tape for him, which has Maria clearly stating that she was driving the car when she hit Henry. Unfortunately, Killian tells Sherman that this evidence is not admissible in court because it was illegally procured and the person who got it for them could go to jail for it, and the only way it could be made legal would be if Sherman claimed the tape was his and he was wearing a wire when he recorded the confession. Killian then tells him that this notion has inspired him to have Sherman go to Arthur’s funeral and wear a wire under his clothes and get her to confess legally. Sherman goes along with this idea, but when he gets Maria alone, he can’t get her to admit to her wrongdoing, and when she tries to get physical with him, she finds the wire. Moments later, Kramer gets Maria’s attention from around the corner of where she and Sherman are standing, and Sherman runs off after Maria refuses to help clear his name. Kramer then talks to Maria, and she says that Sherman just bolted, then tells him that she will testify against Sherman and let him coach her on what to say so she can ensure that Sherman gets imprisoned. That night, Sherman is paid a visit from his father (Donald Moffat), and his father – in a rare showing of support – tells him that he loves him and is here for him, and they embrace. Sherman then informs him that he wants to see the truth come out tomorrow in court and burn all of the people trying to ruin him, but the only way he can do that is to lie (having decided to use the intercom tape and pass it off as his). His father reminds him that he is a big believer in the truth and that it is an essential companion to a man of conscience, but he tells Sherman that – in this case – if the truth won’t set him free, then he must lie.

In court the next day, which has Peter, Weiss, Albert, Bacon, Caroline, Henry’s mother, and Sherman’s parents among the spectators, Maria fibs and says that Sherman was the one who drove the car and he wouldn’t let her report the incident. Sherman then opens his briefcase and pulls out a small speaker that is connected to a tape recorder inside the case, and he plays the intercom tape for all to hear. After Maria faints in shock over having been exposed, Kramer struggles with Sherman and Killian to get a hold of the tape until Judge White (Morgan Freeman) calms the courtroom down and then tells Sherman, Killian, and Kramer to approach the bench with the recorder. After sternly reminding Sherman that he is still under oath, White asks him if he truly recorded the conversation on the tape, and after he asserts that he did (which Killian goes along with), White declares to all that he is ordering the indictment against Sherman dismissed in the interest of justice. This results in an outcry of anger from the assembly, with one person even yelling to White that his decision is not justice before calling him a racist pig. Upon hearing this, White launches into a speech where he asks the people what the color of a man’s skin has to do with witnesses perjuring themselves, a prosecutor enlisting the perjurers, a District Attorney throwing a man to the mob for political gain, and a Reverend who engages in race baiting while claiming to aid disadvantaged New Yorkers. He asks everyone if those things are justice, then continues on by saying that justice is the law, and the law is man’s feeble attempt to set down the principles of decency, and decency is not an angle or a hustle, but something that you learn from people like your grandmother and is in your bones. He lastly pleads with the people to go home and be decent before telling Sherman that he is free to go.

Peter narrates that he never saw Sherman again after that day, nor did anyone else (Sherman obviously having opted for a very reclusive life somewhere else). The movie then takes us back to the beginning, where Peter is appearing at a banquet honoring him and the success of the award-winning, best-selling novel he wrote about Sherman and his ordeal. 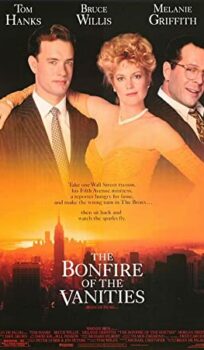