Short Version
The book is the Bible, Eli is blind but repeats it verbatim to the leader of a colony in Alcatraz that is rebuilding humanity, Carnegie gets it but since its in braille its of no use to him and Eli completes his mission after walking for 30 years

Longer Version
Eli (Denzel Washington) is carrying a book that will save humanity and give people something to believe in. He goes to a town to recharge his ipod battery & while in a bar easily but brutally kills at least 7 people while waiting for his battery and water to be refilled. The Mayor/Ruler named Carnegie (Gary Oldman) gets his goons to round him up and they offer him a place to stay but really they lock him up for the night. Carnegie sends Solara (Mila Kunis), his blind concubines Claudia (Jennifer Beals) daughter to seduce Eli. He turns her down but shows her how to pray.

The next morning Solara shows her mother how to pray and Carnegie runs to get Eli but somehow he got out of a locked room with bars and a guard. While trying to get his ipod he is ambushed by Carnegie and his men. Eli takes out almost all of the men & wounds Carnegie in the leg with a shotgun. Eli is shot in the neck during the fray but is perfectly fine. Carnegie’s main henchmen knows he shot Eli point blank but Eli is fine and the henchman cannot bring himself to shoot Eli and Eli walks right out of town. Solara follows Eli and he locks her in an underwater  cavern where the town had been getting their water from. Solara is attacked & almost raped by cannibals but is saved by Eli. They keep walking West and Eli explains about the war, how all Bibles were burned, faith & that he’s been walking for 30 years to get West with the book.

After holing up with an elderly cannibal couple they are ambushed by Carnegie and his men and Eli and Solara are caught and he gives up the book in exchange for Solara’s life. Solara strangles the driver and goes back to get Eli. He’s walking even after being shot in the gut West. Solara drives them to California where Eli says this is where he is meant to bring the book and it’s Alcatraz and that the book taught him to treat others better than they treat themselves. Once inside Alcatraz is actually a thriving community. They have books from all over and they even have a printing press. Eli says he has a copy of the King James Bible but it’s really beat up but a reliable version and he tells the leader of Alcatraz to write down everything he says exactly how he says it. Eli’s eyes are finally shown and he is blind and it’s why he believed so much in protecting the book. (There were hints all through the movie) Another scene shows him reciting the Bible to the leader of Alcatraz and Solara listening.

Carnegie has the book but can’t open it since it’s locked. He finally gets it open and the book is in Braille. He calls Claudia and asks her to read it but not until he tells her where her daughter is. She can smell his rotten leg and knows he is sick and tells him that all his men who died aren’t there to threaten everyone so the towns people are tearing the bar apart to get supplies. She then laughs in his face because the one thing he wants is so far away and she can’t remember how to read Braille anyway and just walks away. Eli dies and Solara prepares to go back and get her mother. 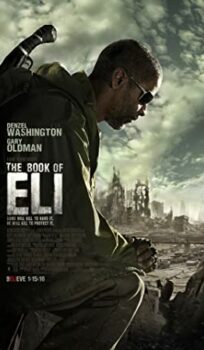