Tim Templeton is a kid with an active imagination and loving parents. However, his world changes when they bring home a suit-wearing baby that talks like a grown man. The Boss Baby (Alec Baldwin) takes over Tim’s home and leaves him feeling shut out.

Tim finds out that Boss Baby was sent by his company, BabyCorp, to stop PuppyCo (where Tim’s parents work) from unveiling a new puppy that would leave all the babies without love. Tim works together with Boss Baby so he can leave the house for good. Despite this, the boys start to bond like actual brothers.

PuppyCo’s CEO Francis Francis (Steve Buscemi) is really Super Colossal Big Fat Boss Baby, Boss Baby’s idol who was kicked out of BabyCorp for not being able to be affected by the formula that prevents the babies from growing. With his Forever Puppy, Francis would eliminate the need for babies and he steals Boss Baby’s own formula to make it happen.

The boys follow their parents to Las Vegas for the unveiling of the new puppy. They foil Francis’s plan and cause him to turn back into a baby. Boss Baby gets promoted but he and Tim miss each other. He decides to quit and live a normal life with the Templetons.

The whole story is told by an adult Tim ((Tobey Maguire)) to his young daughter as his second daughter is born. The older daughter is surprised to find out that her little sister is, in fact, also a Boss Baby. 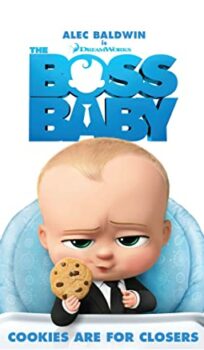