Jason Borne (Matt Damon) is a CIA assassin. He was assigned to kill Wombosi (Adewale Akinnuoye-Agbaje) and to make it look like a coup within his government. When he arrives on the yacht to kill Womobosi, Borne finds the man surrounded by his childen. Bourne is overcome by a fit of consicience. Womobosi wakes up and shoots Bourne twice in the back. Bourne is recovered by an Italian fishing vessel, but he cannot remember who he is. He wants to forget what he has been doing. But he doesn’t know what he wanted to forget, so he begins to try and find his past. He gets the help of Maria (Franke Potente) to help him and they fall in love.

Bourne’s boss, Conklin (Chris Cooper) knows that the plot to kill Womobosi will be exposed since both the assassin and target are still alive. He sends two men to kill Bourne and one to kill Womobosi. The assassination attempts on Bourne fail. Womobosi is killed. Conklin is killed by the CIA to end the chance of exposure of the plot. Bourne gets away and ends up with Maria in Greece. 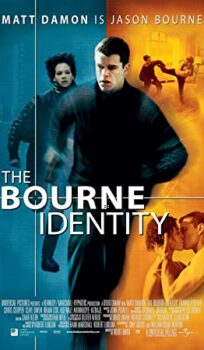