With the help of Nicky Parsons (Julia Stiles) and Pamela Landy (Joan Allen), Jason Bourne (Matt Damon) eventually comes across the training facility where he learned his assassination skills.  He runs across Dr. Albert Hirsch (Albert Finney), the man who runs the facility.  Through him, Bourne learns that he voluntarily offered himself for the project, and was in no way shape or form forced into it.  He finds the opportunity to kill Hirsch, but refuses to do so and barely escapes capture.Meanwhile, we also learn that Ezra Kramer (Scott Glenn) and Noah Vosen (David Strathairn) are involved in the operation, code-named Project Blackbur.  After getting some paperwork from Bourne (which he obtained by cleverly breaking into Noah’s office), Pamela exposes the program by faxing it to a government office.  Bourne manages to get to the roof of the building to escape, only to be shot by Noah and landing in the water, ten stories down.

A TV program runs, showing the exposing of the Blackbur program.  Hirsch and Vosen are arrested and Kramer is questioned about it.  Parsons watches the news report when it mentions Bourne’s real name, David Webb.  The reporter explains that he was shot while attempting to escape.  However, the body was never found, which puts a smile on Parsons’ face.

The last scene is of Bourne/Webb recovering in the water and swimming off into the darkness, a fitting end to the Bourne saga. 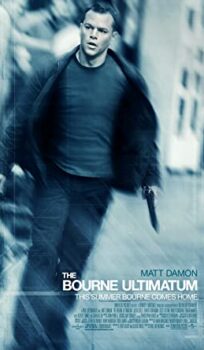