The box is a test administered by aliens through Mr. Steward (Frank Langella).  Mr. Steward assumes this position after being killed by a lightning strike by “those who control it” and coming back to life.  Human extinction is mentioned, so you would assume if humans fail the test, aliens will make humans extinct.  Norma (Cameron Diaz) and Arthur (James Marsden) are married with a son, Walter.  They are presented the box by Mr. Steward.  They are told if they press the button, they’ll get a million dollars, but someone they don’t know will die.  If they do not press the box, then it will be taken to another person and they’ll receive the same offer.

Norma presses the button.  When the button is pushed, a man shoots his wife in the heart, and the police find that couple’s daughter locked in their bathroom.  Norma and Arthur get the million dollars, and Mr. Steward takes the box and tells them it will now be given to someone they don’t know.

After trying to determine who Mr. Steward his, and being confronted with countless people that are under Mr. Stewards mind control, Arthur runs into the man who shot his wife.  The man tells him that his wife pressed the button, and that he ended up shooting her for his own daughter’s sake (this will make sense shortly).

Walter ends up being kidnapped by Mr. Stewards “employees” (those he has mind control over).  Norma and Arthur find themselves back in their home with Mr. Steward there as well.  He informs them that Walter is safe, but he is now blind and deaf.  They are presented 2 more options.  Option 1 is to live with Walter, blind and deaf, with the one millions dollars.  Option 2 is for Arthur to shoot Norma in the heart, and Walter will regain his sight and hearing and the million dollars will be put into an interest bearing account for him to receive when he turns 18.  It is at this point they realize Walter is upstairs locked in the bathroom.  Norma convinces Arthur to shoot her in the heart.  (As he does it we cut to a scene where another couple is pushing the button). Walter regains his sight and hearing.  This is the same situation that the previous man and wife were in when Norma pushed the button.  So the previous person to press the button is the one who dies.  The only way to live if you press the button is if the next person does not press it. 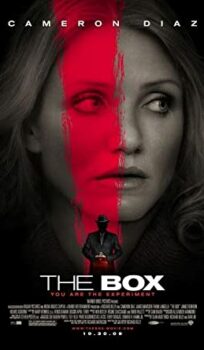