When his wife dies unexpectedly, Joe (Clive Owen) decides to raise their young son Artie on a philosophy of “just say yes” – very few rules, and a lot of mayhem.

Not soon after, his estranged teenage son Harry (from his previous marriage) comes to stay with them.  Harry quickly bonds with Artie, though he is slower to forgive Joe for the way he abandoned him when he remarried, and is not particularly impressed by the lawlessness of their household.

Eventually Joe and Artie convince Harry to stay with them permanently, the repercussions of the “just say yes” philosophy are never really brought up, and the almost love-interest (the single mom at Artie’s school) stays just that – almost. 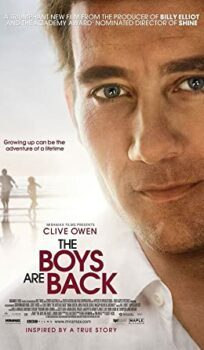