The toaster, lamp, radio, vacuum cleaner and electric blanket (voices of Deanna Oliver, Tim Stack, Jon Lovitz, Thurl Ravenscroft and Timothy E. Day, respectively), seeing a “For Sale” sign placed outside of their cabin, fear that they’ve been abandoned, and go off in search of “The Master,” aka Rob. Rob (voice of Wayne Kaatz), who is now grown, fondly remembers the appliances, and goes to the cabin to retrieve them and take them along to college. The paths of the two quests cross on the highway. The high-tech appliances in Rob’s apartment, flaunting their “advanced features,” toss our heroes into a dumpster. Rob finds the cabin emptied of his friends, and returns home despondent, where the television frantically tries to “tell” him where his friends can be found. Rob finally gets the subliminal message, and heads off to “Crazy Ernie’s Bargain Emporium” (which is actually the landfill), where he spots the appliances. However, an angry electromagnet attacks and threatens everyone. The toaster throws himself into the gears of a crusher in order to save Rob’s life. Rob manages to repair the toaster, and they all live happily ever after (well, until the sequels, anyway). 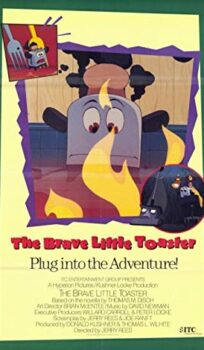