The Bridge on the River Kwai

Pride of achievement in the construction of the bridge overcomes Colonel Nicholson’s (Alec Guinness’) sense of duty as a combatant when, spotting the explosives laid by the British commandos, he brings the matter to the attention of his captor, Major Saito (Sessue Hayakawa). Shears (William Holden) and Joyce (Geoffrey Horne) are killed attempting to detonate the explosives. Finally coming to his senses, Nicholson moves toward the detonator to set off the charges. He is shot in the back by the Japanese, and his body falls, depressing the plunger and destroying the bridge and the crossing train. 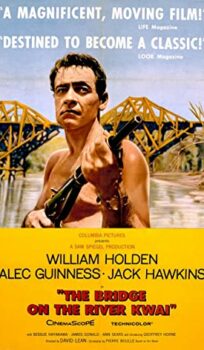