Lt. Harry Brubaker (William Holden) is a WWII fighter pilot who is called back to the service during the Korean War. He can not land on his carrier deck, and falls into the sea. Brubaker is saved by Mike Forney (Mickey Rooney) and Nestor piloting a rescue helicopter. Forney is an irishman known for flying to the rescue in big green hat and scarf. Brubaker’s group is assigned to bomb some bridges the north Koreans need. This is a dangerous target as they have to approach the bridges through a narrow valley with heavy enemy fire.

Brubaker’s wife (Grace Kelly) and children have come to visit him unexpectedly. Brubaker’s time with them is cut short, because Forney has been arrested for fighting. Brubaker uses his rank and money to get Forney free. Brubaker’s wife is very anxious that she is going to lose him.

The attack on the bridges is successful, and the bridges are destroyed. Brubaker’s plane is damaged and he can not make it back. He crash lands in enemy territory,
but survives the landing. Nestor and Forney come for him in the rescue helicopter. Enemy troops arrive and Brubaker, Forney and Nestor are killed. 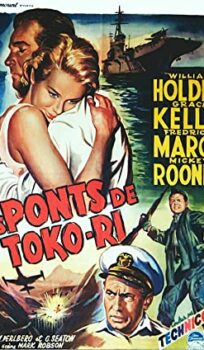