Nobby (Sacha Baron Cohen) lives a simple life with his significant other, Dawn (Rebel Wilson) and their eleven kids in a flat in the town of Grimsby, England.

Nobby and his younger brother, Sebastian (Mark Strong) were separated as young boys prior to getting adopted after their parents passed. Sebastian got adopted by a nice family outside of Grimsby while Nobby stayed behind.

Nobby left a space for Sebastian at his home for when they are reunited. Nobby gets word that Sebastian will be in town for a benefit event. Sebastian is an agent with MI6 and is at the event to stop an assassination. Nobby surprises his brother and chaos ensues. Sebastian is framed for the murder attempts.

Sebastian is on the run for his life so Nobby tags along being ‘helpful’ like breaking Sebastian’s ankle, sucking out poison from Sebastian’s shoulder and testicles, getting him injected with heroin by mistake, hiding from the MI6 hit squad in an elephant’s vagina and getting trapped inside during intercourse.

The big finish happens during the football game final. Rhonda George (Penélope Cruz) is going to unleash a deadly virus during the fireworks. Nobby and Sebastian contain the virus by sitting on the tip infected fireworks. The brothers are reported ‘dead’ but are alive as the antidote is elephant semen. 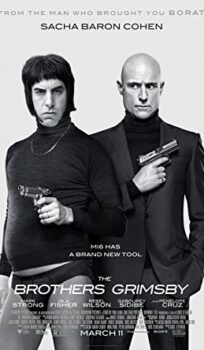