PATRICK’S STORY:
After Patrick (Mike McGlone) is dumped by his girlfriend, Susan (Shari Albert), without being given a proper explanation why, he starts bonding with Leslie (Jennifer Jostyn), an old acquaintance from high school that he had a crush on. Weeks later, he approaches Susan and demands to know why she decided to break up with him, so she reveals to him that she is pregnant. However, she plans to get an abortion because she doesn’t want the child, and knowing that he would be completely against this decision due to his devout Irish Catholic beliefs, she decides to put an end to their relationship. After Patrick tells Leslie about what Susan is planning to do and how he feels that he is going to Hell for it, she tells him that what he ought to do is come to California with her. She explains that she is planning to move out there, but she first needs to acquire $2,000 to purchase a classic car that she has had her eye on for a while; intending on driving all the way there, and she states that once she gets the money, she is gone. He replies that he likes the idea of going on a cross-country drive, feeling that that kind of adventure would be good for him.

Sometime later, Susan suffers a miscarriage, and soon after, she tells Patrick that she wants to reconcile with him. He heads into New York City to see her, but after listening to Susan talk about how she wants to get their old plans back on track (those being her father getting him a job and them moving in together and eventually getting married), Patrick realizes that he doesn’t want any of that, so he tells her that he wants to move on with his life and that he doesn’t love her anymore. He then hastily returns to Long Island to see Leslie, and he asks her how she feels about him before telling her that he wants to come to California with her. Leslie admits that she does have feelings for him, but she reminds him that she is not a devout Catholic anymore. He replies that he doesn’t care about that now.

Some days later, while Patrick and Leslie are relaxing after having sex, Patrick informs Leslie that Jack (Jack Mulcahy) has loaned him the $2,000 that she needs for the car, so they can both go to California now. She excitedly tells him that she loves him, and they kiss. They leave town a few days later.

JACK’S STORY:
One day, Jack ends his extramarital affair with Ann (Elizabeth P. McKay), having gotten tired of cheating on Molly (Connie Britton) and accepting that he loves her. When he returns home afterward, he has a chat with Patrick, and Patrick deduces that he has been unfaithful to Molly (something that he had already suspected back when they had a conversation about adultery some days ago) and tells him that he needs to come clean with her about what he has done.

A few days later, Molly finds out that Jack has strayed from her when she finds a condom in a pair of his jeans while preparing to do a load of laundry. Later on, while she is sitting out in the backyard and thinking about what Jack has done, Jack approaches her to have a chat with her. He tells her that he has been going through a weird period in his life right now, which is why he has been distant from her lately. He tells Molly that he is hesitant to have children with her because he doesn’t want to be a miserable, abusive, and neglectful person like his own father was, plus he doesn’t know if he can be a good father. Molly replies that she knows he would be a great father, and he shouldn’t be using kids as his excuse to not want to start a family. She then – in an indirect way – lets Jack know that she knows what he has been up to lately, and when he asks her what she is talking about, she simply replies that she is not a fool and then goes into the house. Jack later stops by his father’s grave and tells him that he has come here to say goodbye and that he is not going to be the kind of man that he was, then pours some Irish whiskey on the ground in front of his headstone.

Some days later, Jack has another conversation with Molly, and she finally confronts him straight up with her knowledge of how he has been unfaithful to her, and she tells him to be a man and admit to it. He soon nods to confirm his guilt, and when she asks him why he did it, all he does is apologize to her and tell her that he wants to be with her again. She replies that she is unsure about that, and she thinks that it is going to take a long time for her to forgive him. She then asks him if the affair is over and if he loved the other woman, and he responds with – respectively – “yes” and “no”.

The day that Patrick leaves for California with Leslie, we see Jack and Molly give each other a kiss and a hug, indicating that their marriage will survive.

BARRY’S STORY:
Barry (Edward Burns) gets set up with Audry (Maxine Bahns) by his agent, Marty (Peter Johansen). As time passes, they develop a close relationship, and Barry even gives her a Claddagh ring as a gift. However, despite his brothers and Molly pointing out to him that he is definitely falling in love with Audry, Barry is not all that interested in taking the relationship to a more serious level because he has no desire to get tied down with marriage and a family, which he believes are things that Audry wants (or will eventually want) from him.

One day, he receives word from Marty that the latest movie script he wrote might turn into something really big and he might have to move out to California, and some big-name actresses have already expressed interest in doing the lead role. However, Barry feels conflicted about that because he had already promised the lead role to Audry. He later has a one-on-one chat with Patrick about all of this, and when Patrick asks him if he loves Audry, he replies that he might. He then remarks that, just when things were starting to happen for him, he had to go and fall in love.

A few days later, Barry and Audry meet up in Central Park and have a discussion about the status of their relationship, and Audry tells Barry that she spoke to her ex-fiancé, Henry, the night before and he wants her to come back to Virginia. Barry tells her that he doesn’t want her to go back there and marry Henry, but she then accuses him of not knowing if he wants to continue their relationship, either. Barry explains that everything between them happened so quickly, and it took him by surprise; he thought they would just go out for a few drinks and have a few laughs, but instead, they got really serious, and it scares him. Each asks the other what they are going to do about their situation, but neither of them has an answer, and Audry tells Barry that she just wants to be with him, but he replies that he doesn’t know if that is possible anymore. He then tells Audry that he needs some time to figure some things out and suggests that they take a break from each other and see how that goes. Audry agrees to it, but before walking away, she informs him that she can wait for him for a little while, but not forever. The next day, Barry talks to Patrick again about his problems with Audry, and Patrick tells him that his decision for them to take a hiatus was a mistake and that all she wants is him, not a husband. Patrick then explains to Barry that Audry is undoubtedly his true love and you only get one chance at finding that in your life if you’re lucky, and if he took one second to look at himself, he might discover what he truly wants.

The day after Patrick leaves for California, Audry calls Barry asking him to come to her apartment. When he gets there, he finds her packing up all of her belongings, plus she has put all of his stuff into a bag. She explains that she has decided to move back to New Jersey to take care of her father for a while, and when he asks why, she replies that it is because of his refusal to get involved in a serious relationship with her. He makes an excuse that, if he does end up becoming a big-time film director, he will be busy with his career and will have no time for her, and he brings up how he let her know when they first started going out that he wasn’t interested in letting what they have going on between them get too serious. Audry gives him back the Claddagh ring and replies that she doesn’t care what they thought was going to happen; she fell in love with him and she thinks that he fell in love with her, too. Barry admits that he does love her, which prompts her to ask him why he is hindering their relationship, and he replies that he doesn’t want to be in love, nor does he want a wife or a family. Audry tells him that she is not out to marry him or have children with him, but Barry replies that their relationship just can’t be. Audry’s phone then rings, and she lets Barry know that Marty is the caller (he called the apartment a little while ago hoping to get in touch with Barry through her), and shortly after he answers the phone, Barry apologizes to Audry for things having gone this way. She replies that she loves him, and she will never love anyone the way that she loves him, but she isn’t going to do what his mother did with her true love back in Ireland and wait 35 years to be with him. She then picks up her bags and leaves.

Barry resumes talking to Marty, but seconds later, he takes a good look at the Claddagh ring and focuses on the heart in the center of it. This helps him to accept that he needs to be with Audry, so he tells Marty that he can’t talk business with him right now and hangs up, then he goes running out of the apartment and down the street to look for her. He initially thinks that he has lost her for good when he sees someone that looks like her getting into a taxi and taking off, but suddenly, she turns up behind him at a crosswalk. Moments later, they share a passionate kiss in the middle of the street. 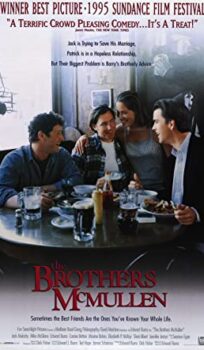