Charles “Buddy” Holly (Gary Busey) is a teenager in 1956 Lubbock, Texas. He and his two best friends Jesse (Don Stroud) and Ray Bob (Charles Martin Smith) form a band and play at local venues like the roller rink. Their choice to play rock and roll music make them unwelcome in Lubbock, but draws the attention of record companies. One label asks them to come to Nashville to record, but Buddy and the band walk out when they want them to record their songs as country and western music. Another label in New York hears them and immediately signs them. At this time, the band begins calling themselves Buddy Holly and the Crickets.

While in New York, Buddy meets Maria Santiago (Maria Richwine), a secretary at the record company, and he quickly falls for her. She likes him too, but her aunt won’t allow her to date a musician or a non-Puerto Rican. Buddy talks to Maria’s aunt, and convinces her to allow him to date her niece. On their first date, Buddy proposes marriage to Maria and she accepts. They get married a short time later.

The type of music Buddy and the Crickets play makes everyone assume they are a black band. This is evident when a music promoter books them sight unseen to play the Apollo Theater in Harlem. When three white boys from Texas show up, the promoter fears how the notorious Apollo crowd will act towards them, but their music quickly wins them over. The band also begins a long concert tour to promote their records. As the tour ends, Jesse and Ray Bob want a break to go back to Lubbock for a while. Buddy wants them to stay in New York to start their next record. They refuse and quit the band. Buddy allows them to take the name The Crickets with them and he starts to record solo.

It’s now the winter of 1958, and Buddy’s label wants him to tour to promote his latest record. Buddy refuses because he wants to spend time with his now-pregnant wife. She convinces him to go because the tour will only last a few weeks, so Buddy agrees to go on the Winter Party Tour of 1959 with Ritchie Valens and The Big Bopper. On February 2nd, 1959, the tour is playing in Clear Lake, Iowa. While Buddy is on stage playing a medley of his hits, Jesse and Ray Bob visit Maria in New York. They want her permission to visit Buddy on tour and convince him to reunite with the Crickets. After she agrees, Jesse and Ray Bob decide to go to the next tour stop in Minnesota. Back in Iowa, the tour bus breaks down, so Buddy, Ritchie, and the Big Bopper decide to charter a plane to Minnesota. A caption at the end of the movie says that the plane crashed and all three musicians died. 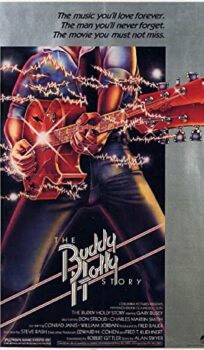