The Cabinet of Caligari

Both ‘Tom’ and ‘Caligari’ are actually manifestations of the psychiatrist (Dan O’Herlihy) who is treating the mentally-ill Jane (Glynis Johns) in the institution that she fails to recognize. Jane finally has a breakthrough that allows her to see the world as it really is. As she prepares to depart, she sees her reflection in the mirror, and is surprised to note that she is not the young woman that she pictures herself, but is middle-aged. The young man, Mark (Richard Davalos), who has shown an interest in her throughout the film is actually her son, and arrives to drive her home at the end. 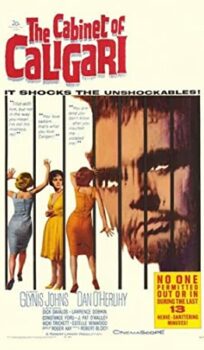