Nick (Eion Bailey) and Lori (Yvonne Strahovski) fall from a rock face while Lori tries to make a call on her cell phone.  Lori is unhurt but Nick breaks his leg landing in a crevice in the rock and his foot is wedged tightly in the rock.  Lori resists the idea for a while but finally agrees to cut off Nick’s foot to free him from the rock.  Lori fights off wolves and manages to kill one.  She rigs a makeshift stretcher for Nick and drags him some unspecified distance before collapsing in exhaustion.  She then finds a stick for a crutch and gets Nick to walk a few more paces before he collapses again.

The wolves have followed them to an open clearing.  Lori again tries to fight off the wolves, but they manage to grab Nick by the leg and drag him some distance.  Lori goes to Nick and decides to kill him so that he will not feel any further pain.  She smothers him with her hands.  Just as Nick dies, a rescue helicopter spots them in the clearing and lands. 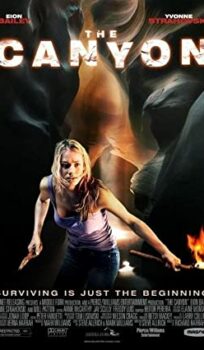