The ghost is the spirit of a six-year-old boy named Joseph Carmichael. He had atrophic arthritis and thus couldn’t walk. His father Richard murdered him in the attic of the house by drowning him while he was having a bath, and then he took his body to the family’s ranch and buried him in the well. He then immediately brought in an six-year-old orphan to pass as Joseph and then took him to Europe, claiming that “Joseph” was to undergo “special therapy” at a Swiss sanatorium to cure him of his condition. 12 years later, they came back to the U.S., with “Joseph” now “cured.” The fake Joseph – the “changeling” – became Senator Joseph Carmichael (Melvyn Douglas).

Richard did all of this out of greed: His deceased wife was the daughter of a multi-millionaire, and when the multi-millionaire died a year before Joseph did, he left nearly everything to Joseph, bypassing Richard since he didn’t like him. However, Richard was named the trustee of the estate. If Joseph died before he turned 21, then the entire estate would go to charity and Richard would be unable to get his hands on any of the money. He killed Joseph and replaced him because he felt he wouldn’t live to see 21, based on his condition.

After figuring all of this out, John (George C. Scott) goes to the location of the old ranch, which was now a bunch of houses, and finds Joseph’s bones and baptism medal underneath a bedroom floor in Mrs. Grey’s (Frances Hyland) house, where the well once stood. He eventually meets Senator Carmichael and tells him about Joseph’s murder and all the other stuff connected with it, but the Senator refuses to believe him and angrily tells him to leave.

Meanwhile, Claire (Trish Van Devere) has gone to the house to try and talk to John since he wasn’t returning any of her calls, and she goes up to the attic, but Joseph’s ghost chases her back down to the main entrance through making his wheelchair move, and he also begins to destroy the house. John soon arrives, ushers Claire outside, and then goes back in to try and get Joseph to stop. He ends up getting knocked senseless, and soon Joseph makes the house catch fire.

Senator Carmichael places Joseph’s medal on a portrait of Richard, and it soon begins to violently shake. He becomes hypnotized and has an out-of-body experience, where he goes to the burning house and up to the attic, and there he witnesses a vision of Joseph being killed by his father. He then suffers a heart attack and dies at his home. John soon shakes the cobwebs out of his head, and he and Claire leave the house and go to the Senator’s home, but they find his body being loaded into an ambulance.

Come morning, the house is burned to the ground, but the wheelchair and music box are intact, and the movie closes with Joseph’s spirit opening the music box and letting it play. 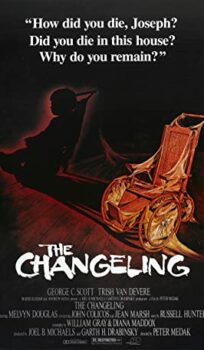