Baxter Slate (Perry King) commits suicide after Sam Lyles (Don Stroud) finds him bound and whipped during a vice raid. That evening, at an impromptu ‘choir practice’ in MacArthur Park, Lyles has too much to drink, and climbs into the back of the paddy wagon to sleep it off. Roscoe Rules (Tim McIntire) comes along, and closes and latches the door. Lyles awakens in a flashback to his combat in Viet Nam, and finding himself locked in, goes berserk. The sexually-confused teenager Alex opens the door to free the screaming cop, but Lyles, confusing him for a flamethrower-wielding Viet Cong, shoots him in the neck, killing him. The Choirboys try to cover up the true story, but Deputy Chief Riggs sweats the truth out of the soon-to-retire ‘Spermwhale’ Whalen (Charles Durning), threatening him with loss of his pension. Whalen sneaks out of town with his pension intact, and everyone else except Calvin Motts (Louis Gossett, Jr.) (who was in night court at the time) receives an extremely harsh suspension. Two months later, when Motts writes to Whalen, telling him how severe a penalty the Choirboys received, Whalen comes back to town and counter-threatens Riggs that he’ll take the story to the press, and show that the LAPD covered up a murder, unless the Choirboys get their jobs back. Riggs relents. 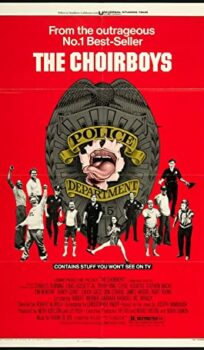