The Chronicles of Narnia: The Lion, the Witch and the Wardrobe(2005)

The Chronicles of Narnia: The Lion, the Witch and the Wardrobe

Aslan the lion (voice of Liam Neeson) sacrifices his life to the White Witch (Tilda Swinton) in order to atone for the betrayal of Narnia by Edmund Pevensie (Skandar Keynes). As Susan and Lucy Pevensie (Anna Popplewell, Georgie Henley) tend to the body of Aslan, Peter Pevensie (William Moseley) leads the good army of Narnia against the Witch. Lucy and Susan are stunned when Aslan rises from the dead, and returns to slay the witch. The four Pevensie children are crowned kings and queens of Narnia. Years later, the adult Pevensie siblings come upon the lamppost that greeted them when they originally entered Narnia, and Lucy leads them back through the wardrobe, and into England, where they are still children stuck as refugees during World War II. Lucy keeps trying to find a way back to Narnia, but a knowing Professor Kirke (Jim Broadbent) tells her that it will be difficult. 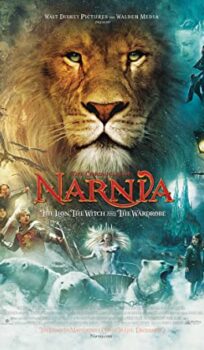