Pooper:
Mae convinces the entire world to go transparent (i.e., lives are broadcast 24/7, no privacy, everyone is recorded) and, in so doing, brings down Bailey and Stenton as the heads of The Circle.

Long Ending:
Thanks to her friend Annie (Karen Gillan), a young woman named Mae (Emma Watson) gets a job with the world’s largest social media company, The Circle. The company is headed by Bailey (Tom Hanks) and Stenton (Patton Oswalt), who are single-mindedly focused on expanding the scope and use of The Circle. Mae seems somewhat skeptical of the impact of The Circle on people’s privacy. Her skepticism leads her to befriend a mysterious co-worker who eventually reveals himself to be Ty Lafitte (John Boyega), the creator of the first Circle product. He confides in Mae that Bailey and Stenton essentially hope to record every person’s life and use the data for vague nefarious purposes (Ty’s fears are essentially confirmed when Bailey and Stenton use the data collected by the Circle to bring down a politician threatening the Company with an antitrust lawsuit).

Mae slowly begins embracing The Circle life. She is first impressed by them when they offer to let her parents Vinnie (Bill Paxton – in his final role) and Bonnie (Glenne Headly)  go on the company’s health plan. Vinnie has MS and his treatments were not previously covered. In exchange, Mae and her family agree to wear a censor allowing The Circle to monitor their physiology 24/7. As Mae becomes more entrenched in The Circle, she becomes addicted to her social media and stops visiting home. This results in a falling out with her best friend Mercer (Ellar Coltrane), who is harassed after she posts a picture of a chandelier he made out of deer antlers (he is wrongly accused of killing the deer to get the antlers).

Feeling sad about Mercer and the distance between she and her parents, Mae steals a kayak to take it out at night by herself. A storm rolls in and capsizes her kayak, but she is saved by the Coast Guard. She learns that cutting edge cameras manufactured by The Circle tracked her movements and reported her distress to the authorities – leading to her rescue. Grateful to The Circle for saving her life, Mae agrees to be the first person to go “fully transparent.” This requires that she broadcast her life 24/7 and forego use of any private accounts. Mae also proves herself to be an adept spokesperson and quickly rises through the company ranks while becoming an internet celebrity due to her transparency. Ultimately, she successfully spearheads an initiative to have world governments mandate that people sign up with The Circle and hold all elections through The Circle (her argument is that this will eliminate barriers to onerous voter registration requirements and The Circle’s analytics will allow politicians to have a daily understanding of their constituents’ will). Meanwhile, Annie has a nervous breakdown over the company’s plans and retires to her family farm.  Mae’s parents essentially stop communicating with her due to their discomfort with being broadcast whenever they do.

Using the massive Circle network, a system of drones, and the cutting edge cameras installed worldwide, Mae introduces a new initiative to track down any person in the world in twenty minutes or less. Mae successfully uses this program to track down a fugitive murderer . . . in 10 minutes. Bailey and Stenton then pressure her to use the program to track down an old friend – Mercer. He is found almost immediately and is deeply distressed by camera wielding Circle members and drones. He tries to flee in his truck while being chased by them. With the world (and Mae) watching, he loses control of his car and crashes off a bridge to his death.

Mae takes some time off (ending her transparency). Though she finds it refreshing to see her parents in person and talk to Annie, she decides to return to The Circle and go transparent again. Before she returns, she calls Ty and gets him to agree to help her with a new plan.

Mae gets Bailey and Stenton to let her do another public presentation. Therein, she says that Mercer’s death was unnecessary because The Circle has the ability to let everyone know where everyone is and what they are doing at all times (thus, Mercer wouldn’t have had to be “found”). She demands that Bailey and Stenton be the first to enter a new world where everyone goes fully transparent, just as she has. They show some hesitation, so she says that Ty has already released their emails and private accounts to the world (including secret accounts that, allegedly, show them engaged in all manner of wrongdoing). The employees of The Circle applaud Mae and agree to join her in going fully transparent while Bailey and Stenton flee the stage in disgrace. Stenton and Bailey no longer are the gatekeepers for all the information collected by The Circle. The final shot is of Mae kayaking while being followed by drones, suggesting the world has followed Mae’s call to action and gone fully transparent. Secrecy has been destroyed, but so too has privacy. In other words, the lesson is that connectivity and transparency is ideal, so long as all people are transparent and no individual controls the flow of data and information culled therefrom. 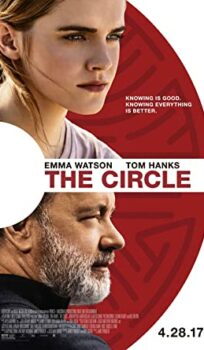