This is a sequel to “The Hustler”. At the beginning of the movie, Eddie Felson hasn’t played pool for 25 years.

In an Atlantic City tournament, “Fast” Eddie Felson (Paul Newman, in his Oscar winning role) beats his up and coming ex-protege Vince (Tom Cruise) to advance to the next stage. However, Vince later gives him 8,000 dollars, which is Eddie’s cut of his profits. It turns out that Vince threw the game, and Eddie only won because Vince intentionally lost. Eddie is unable to compete knowing that he didn’t win honorably, and forfeits the next game and returns the money to Vince (in full view of everyone else at the tournament, and the cameras too). Later Eddie and Vince set up to play a game, and Eddie tells him that he’ll beat him fair and square at one of the upcoming tournaments, and that he’s back. 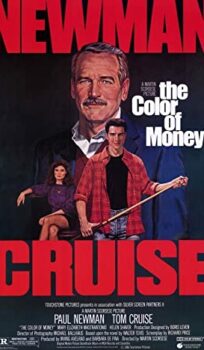