Based on a true story set in the year 2000, the Russian nuclear submarine Kursk is participating in a naval exercise in the Barents Sea when an explosion occurs in the torpedo bay. A practice torpedo was leaking hydrogen peroxide, causing it to overheat and explode. Minutes later, the fire in the torpedo bay ignites the Kursk’s real torpedoes, causing a second explosion, and that one kills nearly the entire crew and cripples the vessel, causing it to sink to the seafloor. Only 23 of the 118 men on board have survived, including one of the officers on the Kursk, Mikhail Averin (Matthias Schoenaerts). They all make it to Compartment Nine, the back of the sub, and wait for rescue. Hours later, the Russians send out a rescue vehicle to assess the situation. They see that the sub is heavily damaged and assume no one could have survived. Meanwhile, Tanya (Lea Seydoux), Averin’s pregnant wife, learns from a friend that the Kursk is missing. She goes to the base to find out what happened, but Tanya, along with the families of the other sailors on board, is told nothing.

The exercise is being monitored by the British Navy, and when they see Russian ships suddenly stop and begin circling an area, the Brits realize that a sub has been lost. Commodore David Russell (Colin Firth) of the British Navy officially offers assistance searching for the missing sub, but the Russians don’t answer. Back at the accident site, a Russian warship is using sonar to hear if any sounds are coming from the Kursk. Averin is using a hammer to make sounds, and the sonar picks it up, so the Russians now know that there are survivors on board. That news quickly returns to the base, and Tanya tells the other sailor’s wives that their husbands and sons are still alive. Once again, they go to the base to try to get more information, but again they are told nothing.

The Brits, using satellites, see a Russian rescue ship suddenly leaving port, so they, too, know that there must be survivors. That ship reaches the Kursk and lets the survivors know they are there. However, when they try to connect to the sub, the ship’s rescue mini-sub won’t seal with the rear hatch. With battery power running low, they are forced to abort the mission and return to the surface, and it will take 12 hours for the battery to recharge. The survivors are furious they are leaving, but Averin comforts them by saying they won’t leave as long as they know we’re alive. Despite his words, their morale is dwindling. Twelve hours later, they try again, and once again, the mini-sub cannot seal, and the mission is aborted. As a result, the Russians finally answer Commodore Russell’s request for assistance, and they say yes, but they need approval from the Kremlin before the Brits can be allowed on board. Admiral Vladimir Petrenko (Max von Sydow), the head of the Russian Navy, denies the approval, claiming that a NATO ship caused the loss of the Kursk, and they have everything under control anyway. This news infuriates Tanya and the other families and, at a press conference, they interrupt Petrenko and openly ask why they are being lied to.

Despite Petrenko’s denial, Admiral Grudzinsky (Peter Simonischek), the head of the Northern Fleet and the leader of the rescue effort, calls Commodore Russell and says come help. Before Russell and his rescue team can arrive, Grudzinsky is relieved of his command, and the new Admiral in charge orders Russell to stay away from the accident site. On the Kursk, the conditions for the survivors are worsening. Their emergency power is about to run out, as is their remaining oxygen and food. The water in the compartment is rising, and another attempt at a rescue is aborted. Because of the latest aborted attempt, the Russians finally allow the Brits to help, but they must wait until dawn to begin their rescue attempt. As the Brits prepare to dive, one of the Kursk survivors is replacing a canister that converts carbon dioxide to oxygen, but it gets wet, causing an explosion. Everyone is okay, but the fire consumes all of the remaining oxygen. Averin, knowing they are all about to die, gathers everyone together and says it was an honor to serve with them, and they begin singing Navy songs. When the Brits finally arrive at the Kursk and open the hatch, they find the compartment completely flooded, and all 23 survivors, including Averin, are dead.

The movie ends back at the base, where a memorial service and funeral are held for the 118 men who died on the Kursk. Admiral Petrenko attends the service, and when he goes to comfort the families, none of them will shake his hand or even look at him. 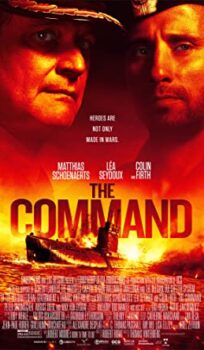