Dexter Riley (Kurt Russell) is a student at Medfield College.  A lightning strike to the building causes a short circuit between Dexter and a super computer, so all the data from the computer is in Dexter’s brain.  Dexter becomes famous, and the school is entered in a big academic contest against more prestigious colleges.

The computer was donated by the local mob boss, Mr Arno (Cesar Romero), who is trying to build a good image as a legitimate businessman.  The computer had details of Arno’s illegal businesses, and Dexter starts spouting out some of this information.

Arno’s men kidnap Dexter.  Dexter’s friends rescue him.  However, Dexter suffers a concussion in the rescue and is losing his powers. At the final question, Dexter can not provide the answer.  Schyler, Dexter’s best friend and perennial second fiddle, knows the answer, so Schyler wins the prize money for Medfield. 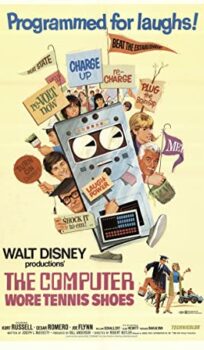