Short version:
McStarley (Vinnie Jones) kills all the other contestants, then kills most of the employees running the show. Conrad (Steve Austin) kills him, then blows up the producer’s helicopter, killing him too. Conrad returns home to Texas and his girlfriend.

Long version:
Ewan McStarley and Saiga team up to finish off the competition. After every contestant but them and Conrad are dead, the team of two goes after Conrad. Conrad kills Saiga. After a chase, the producers drop a shotgun to McStarley, who uses it to chase Conrad. Conrad dives into the stream and swims away, and McStarley finds the camera crew following them in ghillie suits and kills them. He picks up their guard’s MP5.

Conrad and McStarley meet up again, and Conrad rolls over a cliff, falling back into the stream. Since earlier in the movie he covered up his GPS tracker with something, the producers can’t track it, and so assume he is dead. They declare McStarley the winner.

Breckel finds out that the FBI has sent Navy SEALs to take him into custody. He meets McStarley to deactivate his bomb, and tells him that he won’t be winning the prize money, but can go free. The game was fixed in McStarley’s favor without his knowledge. McStarley takes the MP5 and kills the tech team in the building. When he corners Julie, Breckel’s girlfriend, Conrad shoots McStarley dead. He takes the two MP5’s off his body and chases Breckel.

Breckel jumps in a helicoptor and tries to escape. He shoots at the helicoptor but it does nothing. Julie gives him McStarley’s reactivated ankle bracelet, Breckel pulls the ripcord, and throws it into the copter, blowing it up.

Conrad returns to Texas, a free man, and finds his girlfriend who, too, thought he was dead after he fell off the cliff. 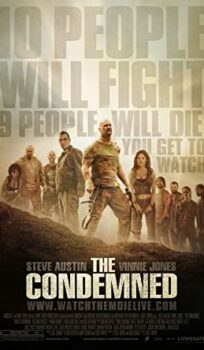