Pooper:
Janet is not perpetrating a hoax and she and the ghost are being manipulated by the demonic nun. Lorraine is able to discover the demon’s name, banishes it back to hell, and saves Ed and Janet from falling to their deaths. The movie ends with Ed and Lorraine dancing together safe at home.

Long Ending:
Based on actual events. During the end credits, the actual real-life audio recording of Janet being possessed is played and various real-life pictures of the haunting are shown.

The film opens with married spiritualists/demonologists Lorraine (Vera Farmiga) and Ed Warren (Patrick Wilson) investigating the famously haunted Amityville house for the Catholic Church. Lorraine goes into a trance where she witnesses Ronald DeFeo’s murder of his family in the house. The ghosts of the DeFeo family then lead Lorraine’s spirit to the basement where she encounters a demonic nun. The demonic nun shows Lorraine a vision of Ed being fatally impaled. This is the same vision Lorraine had during an earlier exorcism (detailed in the first film). Upset by the vision (and after having their credibility attacked on a TV show), Lorraine tells Ed that she no longer wants to get involved with cleansing evil spirits.

Meanwhile in the Enfield borough of London, England, a single mother named Peggy Hodgson (Frances O’Connor) lives with her children Margaret, Janet (Madison Wolfe), Johnny and Billy. The family is soon attacked by the violent ghost of an old man named Bill Wilkins that died in the house. The ghost bites Janet and ultimately manages to possess and speak through her on various occasions. The family moves into their neighbors’ house, where they are attacked by a ghost called the Crooked Man (who is also possessing Janet), which is a character from one of Billy’s toys.

At home, both Ed and their daughter see visions of the demonic nun . Lorraine also has a violent encounter with the demonic nun wherein she scratches out random letters in her bible during the encounter. Later, a priest visits and asks the Warrens to investigate the claims of the haunting in Enfield. Lorraine agrees to go on the condition that if a haunting is confirmed, the Church will conduct the actual exorcism. The Warrens temporarily move in with the Hodgson family.

Lorraine does not sense any spirit in the house. Ed does, however, record a few more conversations with “Bill Wilkins.” They work with various local spiritualists, half of whom think that the haunting is a hoax. One day, Ed finds a retainer with the teeth matching the bite mark found on Janet. The hoax is fully revealed when one of the local spiritualists videotapes Janet destroying a room and faking evidence of a spiritual presence that she later blamed on Bill. With the hoax exposed, the Warrens and other spiritualists depart. After they leave, however, Janet tells Margaret that the ghost told her to fake the evidence to force the spiritualists to leave.

As they wait for the train to the airport, Ed gets a sign to listen to the recordings. He plays them at the same time and realizes that the ghost left clues in various recordings that, when played simultaneously, reveal that the ghost wants to leave the home but is  trapped. Upon hearing this, Lorraine gets a vision and realizes that the demonic nun has enslaved the ghost of Bill Wilkins and the Crooked Man and used them as a means to shield her own presence. The Warrens call the Hodgson’s neighbors to come get them and begin racing back to the Hodgson house.

When the Warrens and neighbors arrive, Janet is fully possessed and has locked her family out of the house. Ed is the only one allowed inside. A lightning bolt hits a tree outside the house causing the tree to split apart into a giant stake (the same stake from Lorraine’s visions of Ed’s death). Lorraine tries to discover the demonic nun’s name as knowing a demon’s name is the only way to gain power over it. She finally realizes the letters she wrote in her bible during her earlier confrontation with the nun spell out the name of the demon – Valak. She then manages to break into the house.

Meanwhile, Ed is upstairs looking for Janet. He finds her standing on the windowsill about to jump to her death on the now splintered tree below. Janet jumps and Ed just manages to catch her in one arm while holding onto the window curtains with his other arm. The curtain starts to tear and when it does, both Janet and Ed will fall and be impaled on the stake below. Lorraine bursts into the room and is confronted by Valak. She is able to banish Valak back to Hell (using its name) and save Ed and Janet from falling just before the curtain fully tears away. Janet thanks the Warrens for believing in and saving her.

The film ends with Ed placing Billy’s Crooked Man toy in his collection along with Annabelle and the music box from the first film. He then leaves the museum to find Lorraine waiting to dance with the love of her life (who is fortunately, still amongst the living)! 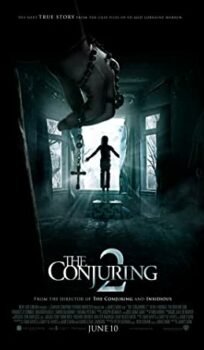