In 1981, Ed and Lorraine Warren (Patrick Wilson and Vera Farmiga) investigate a murder case involving Arne Johnson (Ruairi O’Connor), a young man who is believed to have murdered a man under the influence of demonic possession, just after the Warrens tried to remove a demon from a young boy named David Glatzel – the younger brother of Arne’s girlfriend Debbie (Sarah Catherine Hook) – only for Arne to tell the demon to take him instead.

The Warrens learn of a link between Arne’s case and the disappearance of teenage best friends Jessica Strong and Katie Lincoln. Jessica was possessed and killed Katie before killing herself. Both cases involved a cult totem placed by an occultist woman. Lorraine uses her power to find the woman, who learns of the Warrens and begins to target them. Lorraine then learns that the woman is named Isla, and she is the daughter of a former priest, Kastner, who tried to bring down the occult, only to unintentionally get Isla into it. When she attempts to get Arne to kill himself and simultaneously get Ed to kill Lorraine, Lorraine reminds Ed of his love for her, and he breaks from Isla’s hold to destroy her altar and break the curse. Isla’s demon master then claims her soul for her failure.

Arne was sentenced to five years in prison and is still married to Debbie. Ed then builds a gazebo for Lorraine in honor of their romance. 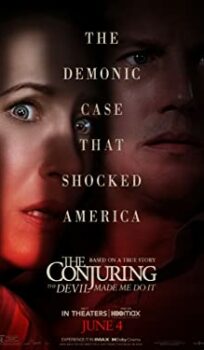