In 1971, Carolyn (Lilli Taylor) and Roger (Ron Livingston) Perron move with their 5 daughters into a run down Rhode Island farm house.

Spooky things start happening to the family. The clocks all stop at 3:07 daily, ghosts of a young boy, a maid and a female witch haunt the family, focusing on it’s weakest members (The mother and two of the daughters).

After weeks of terrorizing events, Carolyn contacts noted paranormal investigators, Ed (Patrick Wilson) and Lorraine (Vera Farmiga) Warren. The Warrens agree to take a look at the house assuming that like most “hauntings,” there are rational explanations. However, upon walking into the house, Lorraine (a clairvoyant) begins the see the evil spirits. They agree to help the Perron’s by collecting the data needed to petition the church for an exorcism of the house.

Upon research of the house, they discover that long ago, the home and the 200 acres it sat on was owned by a witch and her husband. The witch gave birth to a child and one week later murdered the baby in the living room of the house, and then hung herself from a tree in the yard, swearing allegiance to the devil and terror to anyone who lives on her land. In the years since the witches’ death, several odd deaths have taken place on the land, and all the spirits seem to be inside the Perron’s home.

The witch possesses Mrs. Perron and attempted to kill two of her daughters. The Warrens perform an exorcism to save the family and seemingly free the family and the house of the evil spirits. 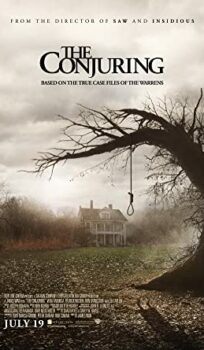