Malkina (Cameron Diaz) had been plotting to steal the money from the cocaine deal all along. After she sets the stage for Reiner (Javier Bardem) to be killed, two goons pick up Laura (Penelope Cruz) at the airport.

While the Counselor (Michael Fassbender) lies low, he has a conversation with Westray (Brad Pitt) who essentially tells him that he knew what he was getting into when he chose to get into this deal. Shortly after receiving the money for the drugs, Westray is attacked by two runners on Malkina’s payroll who simply put a motorized wire noose around his neck while they run off with the money. Westray’s carotid artery is eventually severed and he bleeds to death. Counselor soon receives a disk that says “HOLA!” on it, which he knows means 1) That Laura is dead (we see her body being dumped in a garbage landfill, 2) That Malkina knows where he is. That is the last we see of him.

Malkina meets with a banker who politely tells her that he would like to not engage in these activities any longer, but she kindly persuades him, and he agrees to remain on her team. At that point, Malkina says “Now shall we eat? I’m famished.” 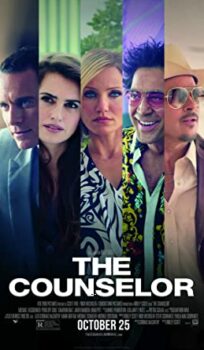