Chase Collins, the new kid in school, is a descedant of the fifth town founder, John Putnam. He resents the four “Sons of Ipswitch” because the Covenant has not only protected them, but also given them instruction as to how their powers work (something that he never had). Chase killed his adoptive parents on his 18th birthday (his Ascension), then tracked down and killed his real father and absorbed his power. As a result of his growing addiction to using magic, Chase has been planning to force Caleb to will all of his power over to him.

After placing a curse on Pogue’s girlfriend and then magically beating up Pogue, Chase tells Caleb to meet him at the old Putnam farm on the night of his Ascension. Chase threatens to kill Sarah and all of Caleb’s relatives and friends if he doesn’t give away his power. Caleb knows that willing away his power will mean his death, but he is willing to sacrifice himself to save the others. He goes to the barn to save Sarah, whom Chase has placed under a spell. While the two of them hurl blasts of magic at each other, Caleb’s Ascension takes place. Once it’s complete, he is much stronger, but still not strong enough to defeat Chase. As they are battling, Caleb’s mother goes to his father (who is decrepit and near-death as a result of his overuse of magic) and convinces him to will his remaining power to Caleb in order to save him. When his father dies, Caleb receives the power and begins blasting away at Chase. After a few back-and-forth shots, Caleb finally hurls a massive blast of magic that lifts Chase off the ground and knocks him into the burning barn. Caleb runs into the barn and pulls Sarah out, just as the structure collapses.

The next day, we see that both Pogue and his girlfriend are recovering at the hospital. The film then cuts to Caleb and Sarah, who are still at the old barn. Firefighters have been searching through the rubble but no trace of Chase has been found. Caleb uses magic to fix his broken windshield, then he and Sarah drive away, wondering if Chase is really gone. 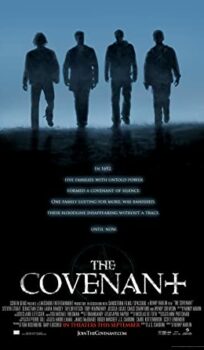