Pepper (Woody Harrelson) and Sonny (Kiefer Sutherland) track Stark (Dylan McDermott) to his sweatshop at the harbor and find him and his henchmen hauling Teresa (Cara Buono) around, and they initiate a brief gunfight with them. Policemen under Shaw’s (Ernie Hudson) command soon arrive and arrest Stark’s henchmen, but Stark manages to get away with Teresa.

Pepper, Sonny, and Shaw pursue them across town until Stark takes Teresa onto a subway train. After Shaw tells them that the train goes along the Manhattan Bridge, Pepper and Sonny take two police horses and gallop down there. As the train passes, they find Stark near the caboose. Stark sees them and fires a few shots at them, and then he takes Teresa to the front of the train. Pepper and Sonny jump onto the caboose and go in after him. Stark forces the operator at gunpoint to stop the train, and he de-boards with Teresa on one side while Pepper and Sonny de-board on the other.

Both parties soon spot each other, and Stark holds his gun to Teresa’s neck to make Pepper and Sonny throw their guns away. He then tries to shoot Sonny, but Pepper forces him down, and he takes the shot in the butt. An arriving Shaw tries to force Stark to surrender, but he gets shot in the shoulder. Sonny then notices a length of power cord connected to some lights above his head, and as another train is passing by, he takes out the cord, and he and Pepper fashion a lasso out of it. He throws the lasso around Stark while Pepper throws the heel of it around a railing on the caboose, and Stark is viciously yanked away and dragged to his death along the tracks.

The next day, Pepper and Sonny say their goodbyes to Shaw and then head back to New Mexico with Teresa. As they go, Pepper presents Sonny with his championship rodeo belt buckle that he had earlier pawned off. When Sonny asks how he got the money to buy it, Pepper won’t tell him, but then they drive past a Calvin Klein underwear billboard where Pepper is the model. 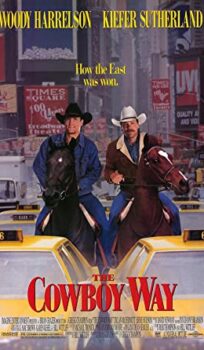