Grug (Nicolas Cage), the mighty but dim patriarch of the Crood clan, is very jealous of Guy (Ryan Reynolds), who is far smarter, who has won the heart of his daughter Eep (Emma Stone), and who has led the family far, far away from the cave life Grug was used to. But gradualy, Grug sees that Guy’s ways are the right ways, and begins to think that his family no longer needs him.

The Crood encounter a huge chasm that would prevent them from reaching the new home Guy has been leading them to. Grug sees that, with his super strength, he can hurl every member of the family across the chasm… but he himself will have to remain behind. He throws everyone else safely across, then seeks shelter in a small nearby cave.

The saber-tooth cat that had been chasing the Croods finds Grug in the cave. When Grug’s torch goes out, he sees that the cat is afraid of the dark, and is actually rather timid. Grug bonds with the cat that he used to fear.

Grug hears the sound of someone blowing on a conch shell, and thinks his family must be in danger. He has to come up with a plan to get across the chasm to save them. He and the cat find a large skeleton, get inside it, and trick a flock of “pirhana birds” into picking it up and flying it across the gorge. Along the way, Grug rescues Douglas, the animal his son had tamed earlier, and a few other animals.

At last, Grug, the saber-tooth cat, and the other animals are reunited with the family, who start a new life in the foest next to a beautiful beach. 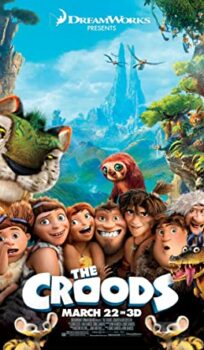