The Cross and the Switchblade(1970)

POOPER:
Nicky becomes a believer at David’s revival and stops the final rumble. All of the members of both gangs ask for a copy of the Bible.

LONG VERSION:
Based on a true story and set in the 1950s, David Wilkerson (Pat Boone) is a young preacher who comes to New York to preach the gospel. He quickly gets involved with the youth gang culture of the area and decides to minister to them. David moves in with the family of a local church pastor, and after befriending the homeless but street-savvy Little Bo, David learns how to reach out to the neighborhood youth. Soon David meets gang leader Nicky Cruz (Erik Estrada, in his acting debut), who sees the preacher first as a joke, then as someone who wants to break up the gang. Nicky’s gang, the Mau Maus, are in a turf war with their rivals, the Bishops, and throughout the movie the two gangs get into several fights, which results in numerous injuries and even a death. One of the fights, or rumbles as they call them, occurs at that gang member’s funeral.

Nicky’s girlfriend Rosa is a homeless heroin addict who prostitutes herself to feed her habit. She goes to David to help sober her up, and after detoxing, she moves into the local pastor’s home, where Little Bo had moved into earlier. A now sober Rosa goes to Nicky to tell him that the preacher is serious about helping the youth, which only makes him more resistant to the preacher. After David decides to hold a revival and invites all the local gangs to attend, Nicky and Bishops leader Big Cat decide to have one final rumble at the revival. Since David convinced the NYPD to stay away (thinking their presence will keep the gangs away), nobody will stop them.

One the night of the revival, the crowd is sparse, but all of the Mau Maus and Bishops are in attendance. They are the only gangs to show up. David begins his sermon, which tells about how no one can be labeled and that a even a perfect man like Jesus can be killed. This gets Nicky’s attention, and David’s words convince him to become a believer in Christ. As David is concluding his sermon, Big Cat jumps on stage and wants to start the rumble by killing David. Nicky jumps on stage as well and stops the rumble by declaring his intention to become a Christian. Big Cat then attacks Nicky, but Nicky is able to defend himself and puts himself in a position to kill Big Cat, but chooses not to. This act of selflessness gets the attention of all of the gang members, except Big Cat who ran away. By the end of the revival, all of the members of both gangs are asking for a copy of the Bible.

The final scene has David speaking in voiceover while he walks the streets of New York. Nicky became an ordained minister himself, and he and David began a troubled teen center in New York and other cities across the country. The movie ends with David saying that in the battle of the cross and the switchblade, the cross won. 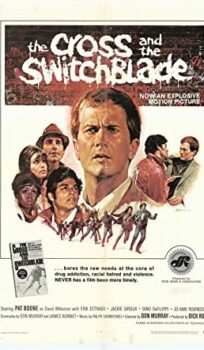