Jimmy (Edward Furlong) kills Pestilence (Yuji Okumoto) and Famine (Tito Ortiz), and outside the church of El Ninˇo (Dennis Hopper) – the head of Luc’s/Death’s (David Boreanaz) cult and Lola’s (Tara Reid) former pimp – War (Marcus Chong) ends up committing suicide by blowing himself up. However, by this point, El Ninˇo has wed Luc and Lola, causing Luc to become Lucifer’s vessel. Jimmy heads into the church to fight Luc, but since his power is waning due to his crow guide being badly wounded, Luc easily pummels him, ties him up, and hangs him from a cross in the church.

After Lola kills El Niňo due to his past mistreatment of her, she and Luc leave the church for the local burial ground, since they have to complete the ritual there before sunrise or else be stripped of their powers. As they are leaving, they pass by the tribal council members who are there to apprehend Jimmy, and Lola tells Lily’s (Emmanuelle Chriqui) father Harold (Danny Trejo) that Lily died at the cult’s hands. The tribal council frees Jimmy from his bonds, and though weakened, he heads off after Luc. He gives Harold his wounded crow before going, hoping he will heal it with the Crow Dance, and Harold soon starts doing the dance after encouragement from Tanner (Dave L. Ortiz).

Jimmy arrives at the burial ground and battles Luc. Again, Luc manhandles Jimmy with ease, but eventually, Harold successfully revives Jimmy’s crow, and Jimmy’s powers are restored. He beats the hell out of Luc, and then the sun rises, rendering Luc and Lola powerless. As Lola repents in her car, Jimmy impales Luc on a piece of jagged wood sticking out of the ground and then kills him by slitting his throat. Harold and Tanner then show up, and though Harold tries to shoot Lola in revenge for Lily’s death, Tanner stops him. Lola is then taken into custody.

Having gotten his revenge, Jimmy passes on into the afterlife, and he reunites with Lily. 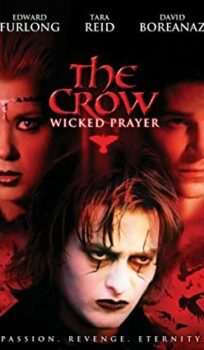