Eric Draven (Brandon Lee) rises from his grave a year after dying to take revenge on the four gangbangers who killed him and his fiance Shelly. At the same time, he causes his friend Sarah’s mother to realize that she needs to be there for her daughter, and it works out. After killing all four of the men, Eric realizes that his job is not done, as they were operating under orders from Top Dollar (Michael Wincott), who wanted to clear out Eric and Shelly’s apartment (among many others) so that he could execute his Devil’s Night- Halloween night when he and his men set fire to several buildings in the area.

Eric, having finally avenged the deaths of himself, his true love, and without knowing it, several others, returns to his grave for a well deserved rest…and Shelly is there waiting for him. 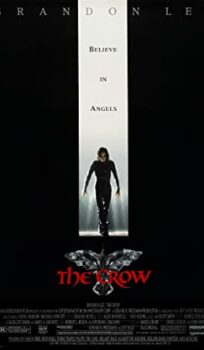