In 1880, several cities are starting to bring electricity to their residents. During this time, famous inventor Thomas Edison (Benedict Cumberbatch) has developed the light bulb, and he wants the public to use them via direct current, or DC, which is cheaper than gaslight but has a limited range and needs expensive generators to travel across a city. Another inventor, George Westinghouse (Michael Shannon), is an advocate of alternating current, or AC. After being snubbed by Edison at a dinner, Westinghouse sets out to prove that AC is the better choice in electricity in that it’s cheaper and can travel further than DC. Edison admits that AC is cheaper, but it’s also more dangerous. Over the next several years, more and more cities across the country are being wired for electricity, with some opting for Edison’s DC and others going with Westinghouse’s AC.

Because Westinghouse’s AC is preventing Edison’s DC from covering the entire country, Edison wants to destroy Westinghouse and take over those cities. He does this by putting on demonstrations that show AC can electrocute an animal as large as an elephant. This works in that more cities are now opting to go with DC. Edison also secretly works on the development of the electric chair, which will use AC. Shortly afterward, the first use of the electric chair happens, and it goes badly. The prisoner suffers horribly before dying, and the newspapers call it worse than a hanging. Westinghouse’s reputation takes a beating as a result, but when he learns of Edison’s involvement with the chair’s invention, he releases that to the press. Now Edison’s reputation is damaged, since he earlier said that he would never invent something that will hurt a person.

While all this is happening, another inventor, Nikola Tesla (Nicholas Hoult) has arrived on the scene. After briefly working for Edison, Tesla starts his own electricity company, but it fails to take off. Because his time with Edison ended poorly, Tesla begins to work with Westinghouse and together they develop a motor that will make AC better and safer. It’s now 1892, and the board of directors overseeing the 1893 World’s Columbian Exposition in Chicago have approached both Edison and Westinghouse to submit bids to illuminate the fair. Both men know winning that bid will end this “war” once and for all. With Edison’s reputation still damaged, his assistant Samuel Insull (Tom Holland) will present the case for DC, while Westinghouse himself will make the case for AC. Insull talks about the safety of DC, while Westinghouse simply says that AC is now safer than before and it’s still cheaper. Days later, after going over both bids, the board chooses…Westinghouse! While Edison’s bulbs will light up the fair, they will be powered by AC.

The movie ends the following year. Edison meets Westinghouse at the fair, and the two men seemingly make peace. Westinghouse says winning the bid saved his business, while Edison says he’s already moved on to his next invention, one that will make everyone forget he ever dealt with electricity. That invention: motion pictures. 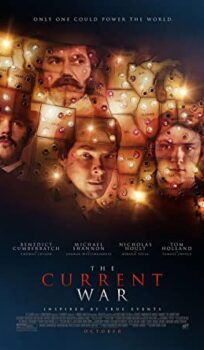