The Curse of Frankenstein(1957)

The movie is told in flashback, as Frankenstein (Peter Cushing) argues to a priest (Alex Gallier) that he didn’t kill Justine (Valerie Gaunt), the creature he created (Christopher Lee) did. Frankenstein’s friend and tutor Paul Krempe (Robert Urquhart), and his fiancé Elizabeth (Hazel Court) know the truth, but they also know that Frankenstein robbed graves to get the pieces for his creature, murdered Professor Bernstein (Paul Hardtmuth) to obtain a “perfect” brain, and trapped Justine with the crazed creature. Rather than try to convince anyone that Frankenstein is telling the truth, they allow him to be led to the guillotine for execution. 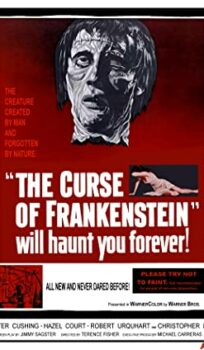