La Llorona (The Weeping Woman) is an evil entity from Mexican folklore, said to be the spirit of a woman who was wronged by her husband and drowned their sons in retribution, but her guilt led her to kill herself and be prevented from entering the afterlife. Now, she roams the Earth, looking for children to claim as hers.

In 1970’s Los Angeles, a social worker named Anna Tate-Garcia (Linda Cardellini) becomes aware of La Llorona when the boys whose case she worked on turn up dead, with their mother blaming Anna for their deaths because she took them out of their house where they were hidden from La Llorona. Soon, the entity attaches herself to Anna’s kids, Chris and Sam. They turn to a former priest named Rafael Olvera (Raymond Cruz) to help them get rid of the demon.

Rafael shows up at their house to help fight La Llorona. After a struggle, La Llorona corners everyone in the attic, but Anna defeats her by sticking a cross through her chest and destroying her spirit.

Rafael leaves when his work is done, but Anna becomes spooked upon seeing what looks like a puddle of tears. 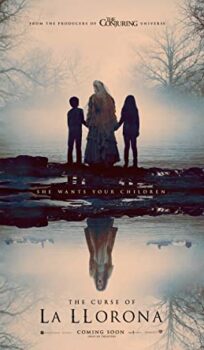