Spoiled, rich world-class figure skater Kate (Moira Kelly), desperate for a new partner, reluctantly agrees to give Doug (D.B. Sweeney) a try. Kate has either worn out, dismissed or been rejected by every other available male skater due to her reputation for being difficult and demanding.

Blue-collar Doug had been a college star and Olympian hockey player before an injury affected his peripheral vision, and figure skating is the only way he can return to the ice in a competitive way, even though he feels it is not the “real” sport that hockey is. They take an instant dislike to each other (she’s prissy, he’s crude) but both refuse to quit knowing that partnership is their only option if either wants to return to the next Olympics.

They eventually work well as a team and place well in competition. An up-and-coming Russian pair are a serious threat, so Doug and Kate are coached in a very difficult (but worth precious scoring points) maneuver as they head to the big showdown. Kate breaks off her engagement because she realizes she has fallen for Doug, whom Kate then catches sleeping with a skating rival.

When they are about to go for the gold, Kate is miserable and announces that they will not perform the maneuver that would give them an edge. Doug tells her that he doesn’t care about winning anymore, that he truly loves her. With Kate encouraged again, they perform flawlessly, with the tricky maneuver added back in, and share a kiss at the end of their routine to thunderous applause. 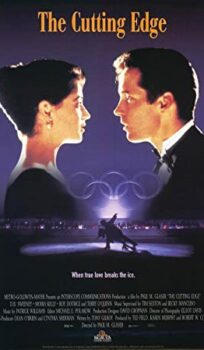