Einar (Eddie Redmayne) and Gerda (Alicia Vikander) are a happily married couple, each with their own art career.

When Gerda asks Einar to model women’s stockings for one of her portraits, she notices it’s awoken a love of wearing women’s clothing.  She suggests he dress up as a woman for an event, invoking a character named Lili that he ends up preferring to his real identity.

Gerda uses Lili as the subject for her paintings, which are so successful, it leads them to Paris.  There, the two reunite with a childhood friend of Einar’s, which begins a love triangle between the three of them.

Einar is told of a doctor who attempted to perform surgery on a man who identified as female.  But that man ran away before the procedure could be performed so, after expressing his desire to become a woman, Einar is slated to have the world’s first sex-change operation.

After his penis is removed, Einar is ecstatic and begins to live completely as Lili Eibe.  But when he goes back for the second part of the surgery (having a vagina constructed), he experiences complications and dies – yet happily, appreciating of getting to finally live in the body of the woman he always felt God intended for him to be. 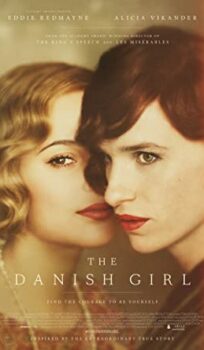