Sean (Emile Hirsch) and Ben (Max Minghella) are in a Russian nightclub drowning their sorrows after their business partner Skyler cheated them out of their idea for a new social networking program.

Aliens arrive and begin to kill everybody. The aliens are hidden behind invisible shields, but give their presence away by lighting up anything electrical around them.

Sean, Ben, Skyler and two girls, Natalie and Anne, try to escape the now deserted city in the aftermath. They meet some other survivors, one of whom has built a microwave projector that can harm the aliens, rendering them vulnerable to normal weapons. Radio messages show that the invasion has happened everywhere, and only a few humans are left alive. They also learn that the aliens are here to extract Earth’s metals for their own use – Humans are just in the way.

Ultimately, Natalie and Sean make it to a Russian nuclear submarine that is waiting in the river to pick up survivors. Ben and Anne are killed by the aliens along the way. They kill several aliens along the way, and aboard the sub, radio messages show that the survivors are learning how to fight back. 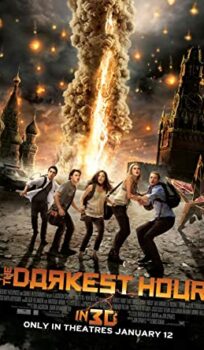