Short pooper:
The majority of the characters, one by one, slowly die of radiation poisoning. Those left by the end clearly look to be doomed to the same fate.

Longer version:
The hospital in Lawrence, Kansas, becomes the hub where people converge, looking for treatment in the aftermath of the all-out nuclear holocaust that has caused the collapse of civilization; however, there is no hope for anyone, as the symptoms of radiation poisoning are incurable and the most the medical staff still remaining can do is try and comfort the agonizing patients, as much as possible.

McCoy (William Allen Young), the young soldier who was desperately trying to get to his family, is last seen showing signs of dementia and physically ravaged, due to radiation. Nurse Bauer (JoBeth Williams), Dr. Oakes’s (Jason Robards) closest friend and co-worker dies off-screen and he laments it. Alison Ransom (Amy Madigan) is seen giving birth, but her delivery is painful and her screams distress everyone around; upon seeing her baby, she cries, either tears of joy or sorrow.

Denise (Lori Lethin) and Danny Dahlberg (Doug Scott), who, along with Stephen Klein (Steve Guttenberg), tried to get help at the hospital for Danny’s blindness caused by the explosion of one of the nuclear bombs, despondently travel back to the farm as Dr. Hachiya (Calvin Jung) tells them nothing can be done. On their way back, they see looters being summarily executed in the open by soldiers.

One night, returning from a local gathering in which fellow farmers were debating on how to go on with their agricultural activities the safest way possible, Jim Dahlberg (John Cullum) spots squatters and, while confronting them, one of them remorselessly shoots him dead. Meanwhile, Denise -who is already showing physical symptoms of radiation poisoning- is found, one last time, by Stephen -also doomed to die- at the gym of the local high school, filled with dozens of people lying in cots, in the same condition as them. They are shown having feelings for -and trying to comfort- each other.

In the end, Dr. Oakes, already aware of his eventual fate, decides to head back to Kansas City, on foot, to die at his home. Upon arrival, he sees the burnt corpse of his wife, who apparently was caught in the middle of the attack while in the bathroom; also, he catches the sight of squatters taking refuge there. Although he angrily orders them to leave, one approaches him with food, which causes him to collapse in despair, while the man tries to comfort him and the camera pans away, showing the hopeless conflagration.

The film ends with a fade-to-black, as Joe Huxley (John Lithgow) is heard repeatedly asking, through shortwave radio: “Hello? Is anyone out there?! Anyone at all?!”, with no answer. Also, title cards inform that the harrowing events depicted in the film are still considered tame, compared to what the actual aftermath of a nuclear holocaust would be (since the film was released during the Cold War, there was always the lingering fear of this situation being unleashed upon humanity). 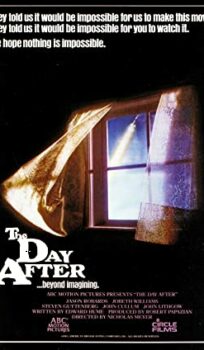