The movie takes place in two different timelines, 1997 and 1966. In 1997, a book is being released by Sarah, chronicling the story of David, Rachel (Helen Mirren) and Stephan’s (Tom Wilkinson) mission to capture a Nazi war criminal, Dr. Vogel (Jesper Christensen). Rachel and Stephan are divorced, and David is a loner. The story told in the book, and repeated all these years, is that Rachel was beaten by Vogel when he tried to escape, and she shot him as he fled. Through the movie, we see the mission in 1966 from the moment Rachel meets the two of them, all the way to when they capture Vogel. Stephan and David have been working on the mission for two years. Rachel is brought in because Vogel is working as a gynecologist and they need a woman to capture him.

Originally, Vogel was supposed to be smuggled out of the country, but the operation falls apart because he wakes up too soon after being drugged by Rachel. The three hold Vogel for several days in an attempt to get him out of the country, during which time he mentally taunts Rachel and David, noticing that they are in love. Rachel is pregnant by a one night stand with Stephan, and hasn’t said anything to either man. He tells David which enrages him enough to smash a plate over his head. Vogel uses the broken pieces to escape and to cut Rachel’s face. What we find out is that Rachel never killed Vogel, he knocked her out and escaped. The three agreed to tell the story that they killed him and disposed of the body.

The reason this is all coming out now is that there is a guy in a nursing home, in the Ukraine, claiming to be Vogel, and a reporter is planning on interviewing him. It turns out David had this lead. Stephan and Rachel haven’t seen David since 1970, when Rachel was unhappily married to Stephan, Sarah was four years old, and David asked Rachel to run away with him. She choose not to, and they never saw each other again till a few days before, where the movie starts in 1997.

David spent all those years looking for Vogel, hoping to bring him to justice. He kills himself because the lie is eating him up inside. Rachel goes to kill Vogel in the nursing home, but when he talks, she’s sure its not him. She calls Stephan to let him know and leaves. However, Vogel was at the hospital. He told his story to another man who has been repeating it as if it is his own life.

Rachel sees Vogel and follows him when he runs. She confronts him in an empty part of the hospital, and they get into a fight. He stabs her with scissors, and she stabs him with a broken mirror. He leaves her for dead, unaware that during the fight she stabbed him in the back with a needle. He dies just beyond the doors. Rachel gets up and limps off bleeding heavily from her injuries. The reporter finishes his interview and sees a piece of paper with his name on it. As he reads, we hear Rachel’s voice asking that it be published and that it is the real story of her mission to capture Vogel. 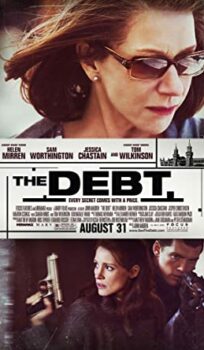