Coffin (Eli Wallach) tries to get the morphine ampoules stashed in Romer’s (Robert Shaw) lighthouse light, but Romer rigged the light’s door to explode, so Coffin is killed and the morphine is destroyed. Romer, David (Nick Nolte) & Gail (Jacqueline Bisset) head back to the wreck of the Goliath so Romer could blow it up and David could retrieve the Duchess of Parma’s dragon pendant from the wreck of the Grifon beneath it, as proof to the world that a fortune in Spanish treasure existed there, but Cloche (Louis Gossett, Jr.) and his men go after them.

Cloche finds Romer as he is about to ignite the fuse for the explosives and attacks him, but Romer gets the fuse lit and fights back. Cloche dies when Romer has the moray eel that resided in the ship kill him. David comes and aids Romer by giving him some air, but when he tries to go for the pendant, Romer cuts his regulator so he would have to go to the surface, because the explosives were soon to go off. As David goes up, Romer dives down into the hole where the pendant is, and soon after, the Goliath explodes and sinks to the bottom of the reef.

Romer eventually emerges from the sea, dragon pendant in hand, and he gives it to David. 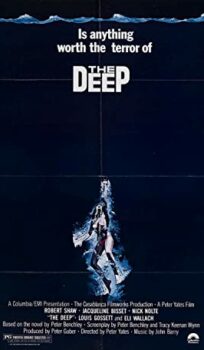