Prelude: Three friends Juno (Natalie Mendoza), Sarah (Shauna Macdonald), and Beth (Alex Reid) are white-water rafting. Sarah’s husband and daughter are waiting at the finish. As they get out of the raft, the audience is made aware that the husband and Juno are exchanging amorous looks. It is implied that they probably are cheating with each other. Sarah, the husband, and their daughter drive off. The husband is distant and begins to daydream. They hit another car carrying metal poles. These poles impale the husband and daughter. Sarah finds out later that she’s the only survivor.

One year later: The three friends reunite with three others who enjoy outdoor adventuring, and together, the six go on a splelunking expedition. The organizer, Juno, trick the other five into thinking that the cave system is an on-the-map tourist kind of a cave. After they enter the cave and get lost, it is revealed that this cave is a new system, and that she brought them here to bring them all closer together. They encounter these bat-creatures, who proceeds to kill them all. During an earlier encounter, Juno accidently strikes her pick-ax into Beth’s neck, and then leavers her to die. Sarah gets seperated from the pack, but manages to kill several bat-creatures. She finds Beth, still alive, and Beth tells her that Juno did this to her. She also gives Sarah a pendant that she managed to grab from Juno. The pendant says “Love Each Day”, something Sarah’s husband always said (in short, telling Sarah the truth about Juno). Beth tells Sarah to kill her, and Sarah does with a rock to the head.

Sarah and Juno reunite, and as they are about to escape, Sarah shows Juno the pendant, then wounds her leg, leaving her to her screaming death. As the creatures close in, Sarah finds her way out and escapes in Juno’s truck. She stops by the road to puke, and as she finishes, she sees Juno’s ghost in her car, and screams as the movie ends. 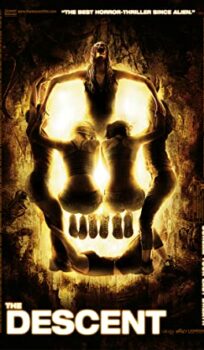