According to Guillermo Del Toro, this movie is the spiritual sibling of “Pan’s Labyrinth”
This movie takes place during the Spanish Civil War.

Santi’s ghost begins to haunt the school, particularly the new boy, Carlos (Fernando Tielve). At first, Carlos is frightened by the spirit, but as time goes by, he tries to understand what it wants.

At the same time, the war escalates outside the walls. The school, which supports the Communist resistance (It is holding onto the gold for them) is in danger of being raided by the fascists. Carmen, the principal, and Dr. Casares, the biology professor prepare to leave the school with all of the children. But before they can go, Jacinto blows up the fuel and the truck. The explosion kills many of the boys (Just as the ghost of Santi predicted) Carmen, and after a day or so, Dr. Casares. Jacinto locks all the boys up in their dormitory, and kills his fiance (Irene Visedo), who left the school to look for help. He then goes about looking for the gold inside the safe, but eventually finds it hidden in Carmen’s wooden leg.

The boys escape their dormitory with the help of the ghost of Dr. Casares, and lure Jacinto into the basement, where he sank the body of Santi. There, they stab him with homemade weapons, and push him into the water tank, where Santi (plus the weight of the gold he stole) hold him to the ground, and he drowns.

The film ends with the survivors of these events leaving the orphanage, watched by the spirit of Dr. Casares, who asks, “What is a ghost? A tragedy condemned to repeat itself time and again? An instant of pain, perhaps. Something dead which still seems to be alive. An emotion suspended in time. Like a blurred photograph. Like an insect trapped in amber.”

The bomb that dropped the night Santi died remains unexploded in the middle of the courtyard. 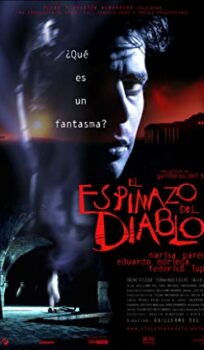