Pooper:
The group’s unity soon collapses as the body-count slowly rises. Eva is the only one to escape the bunker, crawling out through the sewer pipes in a containment suit. The film ends as she looks out over an incinerated city with no signs of life.

Long ending:
The film opens with Eva (Lauren German) crying as she watches a nuclear bomb hit the center of her city from her apartment building. Her boyfriend, Sam, grabs her hand and the two run into the building’s basement bunker. Several other residents manage to run into the bunker before the bunker’s owner/building’s supervisor Mickey (Michael Biehn) locks them in (and tapes the door shut to keep out radioactive dust). The survivors cower as the building collapses above them. In addition to Mickey, Eva, and Sam, the other survivors are:
• three young men – Josh (Milo Ventimiglia), his half-brother Adrien, and his friend Bobby
• a man in his mid-40s named Delvin, and
• a woman named Marilyn with her young daughter Wendi.

Mickey agrees to shelter and feed them (all he has are baked beans) and quickly takes charge of the group, threatening to kill anyone who tries to leave with his axe (Mickey fears being exposed to the dust outside).

After some period of time, the group hears a noise outside. They watch as four unidentified men in containment suits burn a whole through the door, entering with radiation detectors and guns. They do not respond to any of the group’s questions, and then begin shooting at them (one bullet hitting Adrien in the arm). Two abduct young Wendi, taking her outside the bunker, while the other two are killed by the residents during the scuffle (one of them held up a detector to Eva’s stomach saying “we have another one” before being killed. Combined with some statements by Sam, this suggests Eva may be pregnant, although this is never resolved). Mickey blames the situation on Arabs, but when they strip the dead intruders, neither is of Arabic descent (and we later find out Mickey’s wife was killed in 9/11, making him predisposed to blame people from the Middle East). Further, the invaders had American accents (the identity/purpose of the invaders and the fate of Wendi are never revealed).

Eva treats Adrien’s wound, but he can barely use his arm (it is clear they are attracted to each other). Josh agrees to put on one of the containment suits and exits the bunker to search for Wendi. He discovers that the invaders have set up some sort of laboratory outside the bunker. In the laboratory, he finds Wendi and two other children. The children’s heads are shaved and they lie unconscious connected to some mysterious machines. He also finds vials of blood and body parts. He is confronted by some of the other people in containment suits and kills several before fleeing back to the bunker, losing the gun in the process. The group then listens as the invaders on the other side of the bunker door welds the door shut permanently – the group now stuck inside. Marilyn is driven insane by this and soon begins having sex with Bobby after Bobby steps up to chop up the bodies of the dead invaders to throw down the bunker latrine.

Mickey then claims that they are almost out of supplies. Delvin, with whom Mickey has been arguing with throughout the film, sneaks in to Mickey’s private living quarters and discovers a walk-in safe full of supplies (beyond even the baked beans). Mickey catches him and kills him with the other invader’s gun before being subdued by the rest and tied to a wheelchair (Eva throws the gun down the latrine). Soon, Josh asserts his dominance – with he, Bobby and Marilyn controlling the supplies. They hand out ever smaller rations to Sam (who is weak and detached); Adrien (who is still lame and non-confrontational); Eva (the only seemingly rational one left); and Mickey who remains bound to the chair. Further, Mickey and Bobby become ever-more violent, constantly threatening Sam and sexually assaulting Marilyn. Everybody”s hair begins falling out and begin bleeding – suggesting they have either been exposed to radiation or are suffering from lack of nutrition.

Ultimately, Josh only agrees to give the others food if Sam chops up Delvin’s body to throw down the latrine. Instead, Eva is provoked into chopping up the body. Later, Eva finds Marilyn lying dead in Josh and Bobby’s room, killed by the two men via either neglect or abuse. Realizing that things can’t continue as they are, she goes to Mickey for help. He tells her he has a gun hidden in the walk-in safe and that the latrine sewer system leads out of the bunker. Eva goes to Sam and tells him about the gun, stating she will distract Josh and Bobby while he gets the gun. Eva dismantles the electrical system. While Bobby attempts to fix it, she tries to seduce Josh without actually sleeping with him.

Bobby catches Sam in the safe and tries to sexually assault him. Meanwhile, Josh loses patience and begins beating Eva. Bobby eventually calms down and Sam gets the gun, but Josh and Bobby confront Sam. Eva begs for Sam to give the gun to Adrien, but instead, Sam ends up shooting Adrien, giving Josh and Bobby enough time to begin beating him and wrest control of the gun. During the struggle Eva slits Bobby’s throat with a can lid and then runs and frees Mickey.  Mickey confronts Josh, who in a lucid moment, realizes all the pain he has caused and lights himself on fire. Sam and Mickey attempt to put out the fire, but are unsuccessful as it begins to spread throughout the bunker. Meanwhile, Eva puts on the last remaining containment suit, grabs a handful of canned goods, and locks Mickey and Sam in the burning bunker as she leaps down the latrine and into the sewer system. Although Sam and Mickey attempt to break down the door to the latrine and follow, they eventually sit down and accept their fate as the flames spread.

The film ends with Eva outside looking upon the complete post-nuclear wasteland. Ashes fall around her from the burning landscape, and no other humans are in sight. 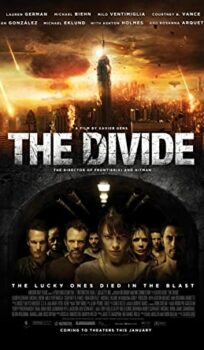