Dr. Jack McKee’s (William Hurt’s) laryngeal surgery is a success; the tumor is fully removed and there has been no spread of it.  During his recovery, he even manages to reconnect with his estranged wife, Anne (Christine Lahti), and young son, Nicky (Charlie Korsmo).  Furthermore, he has had an epiphany in regards to his cold behaviour towards other people and life, which, among other things, manifests into a loving, joyful attitude for Mr. Maris’s (William Marquez’s) heart surgery.

Meanwhile, his newfound friend, fellow patient June (Elizabeth Perkins), dies of her tumor.  However, before she did, she was seen writing a letter for Jack, which he receives shortly after.  In it, she recounted an old tale of a scarecrow and paralleled it to his situation of estrangement with his family and loved ones, and how he should just “open his arms and reach, to let people come to him”.  This makes him rejoice, since he had already been able to achieve it. 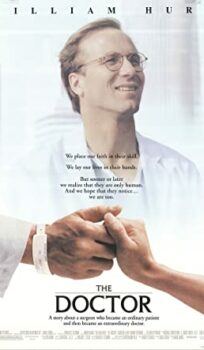